Why I Love Daytona

For some it is the wrecks that draws in a minimum five cars each time they happen. For others it's the speed. With cars going close to and sometimes over 200 miles an hour. To others like myself the Daytona 500 is charmed as it signals the fresh start to a brand new racing season.

Daytona has another special place in my heart. While I have never seen a race in person. A goal that the wife, and I want to change in the future. How long until that future race is yet to be determined. This is the one racetrack on the circuit I have seen in person.

In 2010 we were lucky enough to spend our second time visiting Disney World. On the list of things to do were visit Daytona Raceway, and visit Daytona Beach. With those two items on the list I was somehow able to convince the wife, and daughter going in early June was the way to go then. Convinced we made the plans for close to two weeks in Florida. A day was set aside for a trip to Daytona with the major share being a visit to the raceway.

As the days got closer to this trip I had put a vision in my head of how big this place would be. The vision was of this huge track surrounded by seats. Driving closer to the raceway it was bigger than I had ever imagined. Honestly I can say it blew away the vision I had planted in my brain. Amazing doesn't even describe the feelings going through my brain at that time. You have to keep in mind that the straightaways are around one mile long give or take.

As we arrived they have a statue dedicated to Dale Earnhardt Senior. Daytona was where he died in a tragic crash on the final lap. While I'm not a Senior fan the statue was very cool. 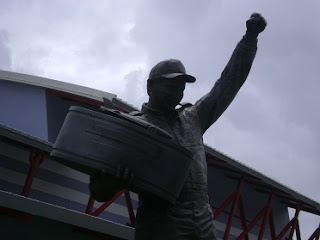 Besides the statue they have a walk of fame for all the drivers who have won The Daytona 500. 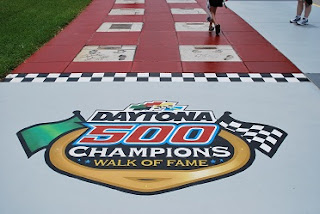 Going inside they have a museum full of the tracks history. Included are a few cars to help with the visual parts. A history note about that track we learned is. The reason this is the most important race of the season, Daytona is the first track ever built, so it's the birthplace of NASCAR. While I won't bore you too much with museum pictures there was one cool thing that needs mentioning. Each season after the race. They take the winners car right from the winner's circle, and put it in a special place for everyone to see. Then the following season when there is a new winner the current car is replaced. In 2010 the winner was Jamie McMurray. 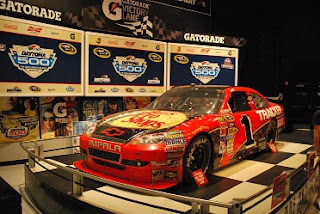 What I thought was the coolest part of the car is you could still see the confetti. A closer look also revealed the pop, beer, and whatever other sticky things they were celebrating with. While you can't touch the car the stickiness was obvious. 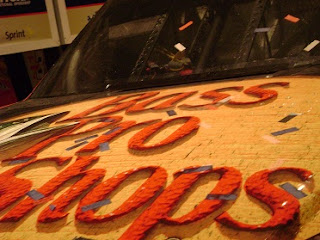 After the winners car it was off to see the legendary track itself. This was the part that we were all looking forward to the most. While the museum was awesome. I'd say if it was a meal the museum was the main course. The track was dessert, and it was time for dessert. We had to wait outside in the blistering heat for about 15 minutes, but it was worth every second. Being the track is so huge they drive you in a shuttle type vehicle With such a huge track you only get to drive half the track. The half you do get to see is the best parts so it's all good. The first stop is at the top of one of the bankings where they stop, and let you take pictures. 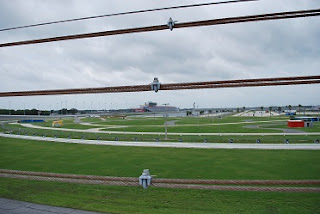 Following this they take you onto the track. The first stop they make is at the bottom of the banking that is below where I was when I took the photograph above. It's pretty impressive to look up at this bad boy. The photograph doesn't even come close to doing this view justice. 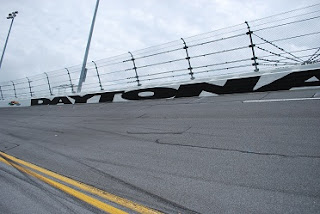 After this they take you towards pit row. Showing more of the things we don't get to see at home the tour finished with a stop at the Winner's Circle. 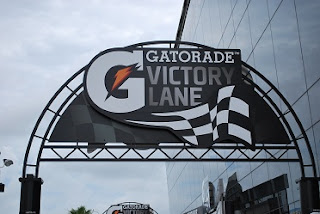 They take individual pictures of everyone in the tour group. They are pretty cool as you are standing exactly where the winning team for the race stands. Seeing all this in person has made me an even bigger fan of this race than ever before.
Posted by The Prowling Cat at 7:24 AM