A Week With Two Trips

As I said in yersterday's post I got to do some extra running around on Monday. After hitting Griffey jr., and Raul Ibanez bobble-heads on Friday. I was excited about going to another Goodwill, and hopefully keep the streak alive. Heading up to one of my favorite stores I went through row after row coming up with a new M&M tin for the Christmas tins collection. A couple other items of interest caught my attention, but nothing came home.

Heading down the road I thought it might be fun to see if the card shop in town was open. Being it was eleven and the store usually opens at noon my hopes weren't very high. My luck was running high as a note was on the door saying he wouldn't open until 12:30, but the door was open. Walking in the owner let me know that he had come in early. He'd be leaving at 11:15 so time was limited. Not wanting to waste a second I headed to the boxes of singles, and picked out the 2013 box. The box was light, but did have seven cards that I picked out for possible trading. Nothing fantastic though as it was a 25 cent box. 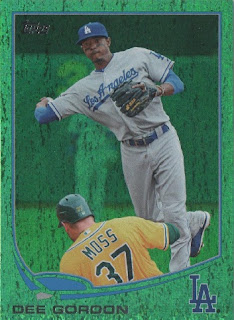 Before leaving I decided to try my luck with two pack of Topps. My luck in cards was running low as there wasn't anything special in the two packs. I did get a Fielder mini which was bent to heck so luck on that was weak as well. Sad thing is I didn't notice until getting the cards home, and preparing to add them with my other 2013's.

A trip to the other Goodwill in town followed with what ended up being a huge disappointment. I was able to get 20 bubble mailers in a package for 5 dollars. Maybe they will get some use in the near future for trades so I guess it wasn't a total loss.

Leaving town I was ready to head home with what little treasures I had found. As I passed Albany the Goodwill in town was calling my name. Thinking about how well I did on Friday I just couldn't pass up the voice. As I walked in I did the usual start in the sporting good section. I told myself recently that no more logo baseballs would be coming home. That promise has been kept until Monday when I spotted an Arizona Diamondbacks ball from their inaugural season. 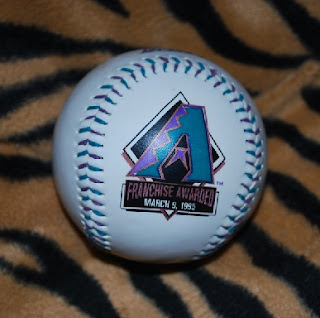 From that point on my luck was in full swing again. Rounding the corner to the nick-nac aisle I looked at the bottom shelf. Glancing up I spotted something I thought would never be found there. A treasure that I didn't even imagine I'd be able to add into the collection.

The first thought was to the post I did Saturday saying if I ever found the Felix, and Ichiro for this set. I would rush out, and buy a lottery ticket. 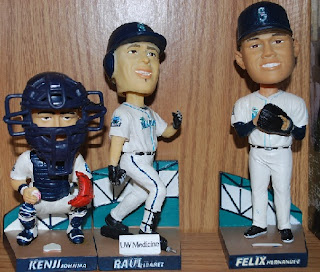 Guess I'd better get the money ready. Only Ichiro is missing now...
Posted by The Prowling Cat at 2:30 PM