It's been over a month since my last successful trip to a Goodwill. While I have only been twice since then they were both busts. Something just told me that today would be different and before coming home a trip was needed. Work was slow so they let five people leave early, and I was lucky enough to be one of those people. Leaving at lunch I thought it'd be fun to take the side trip, and see if I could find anything good.

Once inside I made the usual trip down the sports aisle where they sometimes have the advertising baseballs. I've been very selective on picking these up as currently five are still looking for a showing place. Lately it's been easy as I haven't seen anything new in baseballs. Turning around I found a white matte that I hoped would go with a frame I had picked up two months ago. Two weeks ago Walgreens had a sale on 8x10 photos so I blew up both a Safeco Field, and a Daytona Raceway picture. The matte looks awesome with the picture, and will end up on the wall in the near future.

Rounding the corner I hit the nick-nac aisle, and the search was on. A third of the way down the aisle on the top shelf were five bobble-heads. Looking at each one disappointment started to set in as three were damaged, and the other two were the infamous Brent Morel which was a giveaway this past season at a Corvallis Knights game. I say infamous as it seems like no matter where the Goodwill is I find a minimum one of these bobble-heads. Even the one at the coast which is two hours away had the Morel bobble-head.

The three damaged would have been great additions so it was sad to see all three in the shape they were in. One was the old Portland Rockies owner, whose head fell off when I picked him up. The second a Portland Beaver player had a chip missing on the batting helmet, and the sponsor blocks had chips were damaged as well. The third was the Portland Timbers, and it's chainsaw was torn off.

Still wandering the row as I wanted to make sure nothing was missed. A lady moved a couple items on the bottom shelf in the blue section. As she rounded the corner they fell to the ground revealing. 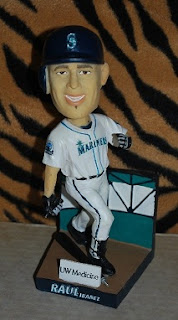 This goes with the Kenji Johjima I got last month at the coast. Still missing is the Ichiro with Gold Gloves, and Felix Hernandez. If I ever find those two at a Goodwill my next stop will be a store for a lottery ticket. Excited about the find I tried to put the items back on the shelf. While trying to put things back up another one slid out of place to show another box. 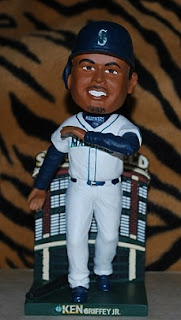 This goes with a Brandon Marrow we got at a game we went to in Seattle. I personally love this series, and hope to finish it one day. The problem is as with the 2007 series Ichiro, and Felix are missing along with Franklin Gutierrez. When put together they form an outside of Safeco Field. The Ichiro has the glove with the hole in it sits outside the left field gate.

Overall this will be a tough trip to beat as it might even be my most successful ever.
Posted by The Prowling Cat at 6:00 AM