If you've been following the cat for awhile you know that Monday is the day stuff gets done around here. Unfortunately I decided to stay up way late Sunday night. That led to a late wake-up and a day where I didn't get a ton completed. A part of me wanted to head up north, and go to the Goodwill, then stop into the card shop up that direction. Neither of those got completed due to circumstances beyond my control.

The first stop was Walmart as the wife's left me her car to get the oil changed. No big deal here as the oil change took just a touch over half an hour. Problem is as I said, the start was a late one. While waiting for the car a wander through the store up to the card section was just calling out. Listening to those little voices in my head saying buy a blaster pack. I couldn't resist the urge to quiet the voices, and so I reached back, and picked out what I had hoped would be a winning pack. The pack didn't disappoint, as it was full of cards for the set I keep toying with possibly attempting to complete. 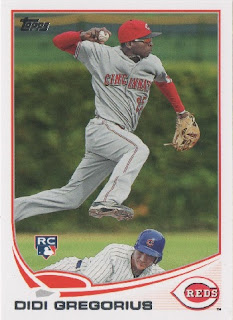 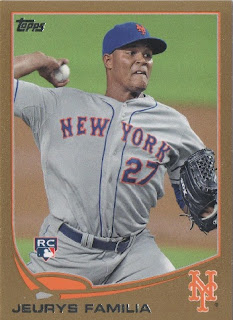 My first gold card. Minute I pulled this card I had a home in mind for it. Now I just need to get the package together, and mailed out. 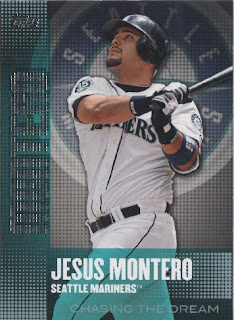 Inside was another card for the personal player collection in a Jesus Montero. I keep toying with the idea of building this subset as well. While I keep slowly adding these as well. I feel like it has better odds than the 2013 Topps of getting completed. Something about prospects just draws me in, and I can't stop adding them.

With how excited I was with the cards in this package. The desire to head up north was growing stronger, and was drawing me hard. The voices were telling me I had to go to that card shop as something cool was there waiting for me. Then came the nail in the coffin that put an end to the trip altogether. Before leaving town I had to go across town to get flea medicine for the dog. Stopping at the house to grab the dog we were on our way.

Once inside a lady was coming out with her small dog. For some reason there wasn't the usual two people working the front desk. What this meant is one person dealing with all their questions. After the question marathon came the dog shield so her dog couldn't lick the stitches from whatever happened to its leg. Not liking the size the vet picked out, it took three attempts to find a size she liked for the dog. Without dragging the story out longer I was there for an hour. Thus the dream of heading north was over as the voices had stopped.

Giving up on the dream I decided it seemed like a good day to just hang with the dog. Maybe next weekend the voices will start up again.
Posted by The Prowling Cat at 2:00 PM