While I started the journey through box after box of dime cards. The daughter was still spending time in one of her favorite stores Claire's. The only problem is you can only kill so much time in one store before boredom sets in. Her exact quote was ' I saw everything in that store four times'. Afterwards she spent probably another one to two hours following me, and pushing me out the door. During that time more cards made it into the card collection.

Sadly only one Rockies player was added 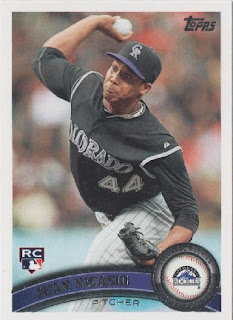 Juan's had a tough start that will hopefully start in an upward trend in 2013. While in the minors Juan was a strikeout machine. Much like the Rockies and all us fans. We'd love to see him capture that greatness only in the majors. 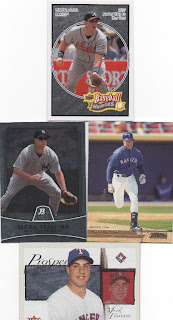 Another of my player collections is Mark Teixeira. I was excited to find four cards of the Yankees first baseman, and snatched them up. If you ever read my post early on in the start of 'The Prowling Cat'. I am far from a Yankees fan, and seeing him wearing pinstripes kills me. I deal with it though, and cheer him on.

My last player if you want to call him that additions were of the driver variety. If you didn't know we are huge NASCAR fans in my house. Our big three sports are baseball, college football, and NASCAR. The driver we root for is Kyle Busch. With him being one of the huge stars of the sport I was pleasantly surprised to find these three cards in a dime box. 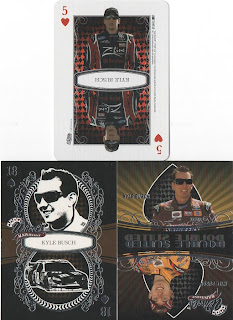 Ending my additions to the collection were some cards that I had bought hoping they were needed for sets I've been working on. Unfortunately all but one of the cards were doubles. Luckily these were all bought from a nickel box so I'm not to upset. 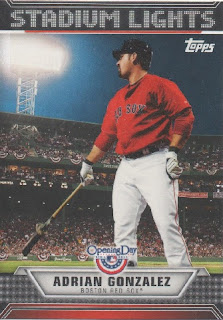 Going with all these cards were a couple that I plan on trading away at some point.Throw in two cards that will make an appearance in a future post, and it was an awesome show. This show from what I can tell rotates monthly between two spots. Overhearing a conversation between a buyer, and seller this seems to be the more preferred show. There was still stacks of boxes I was unable to go through but time just killed me. I live an hour and a half from where it was held so we had to leave. My eyes were starting to hurt as well so it was for the best. Hopefully I can get back up there before summer's end. It's going to be a jam packed summer, but I'll do everything I can to make it happen.
Posted by The Prowling Cat at 3:00 PM