Since coming back into the baseball card collecting. I have done a few things that haven't seen my presence in many a years. First was going into a baseball card shop to purchase baseball cards. Saturday that list had another item added to it. For the first time in probably twenty years I went to a card show.

The daughter wanted to head up to Salem, and spend her Claire's gift card. After reading on another blog about COMC having a person at a Saturday card show in Beaverton. Thinking it sounded like fun, I mentioned it to the wife. She wasn't going to go either way so it didn't matter to her. The daughter though didn't realize how this was going to end. The offer was made to go with me, and visit Claire's after going to the card show. As luck had it, the mall holding the show had a Claire's in it. Talk about killing two birds with one stone.

My first real stop was at a table loaded with Mariners. Figuring this would be a great place to maybe add some new cards inot the player collections. I hit the guy up for two Kyle Seager cards, a Danny Hultzen, and a Dustin Ackley. 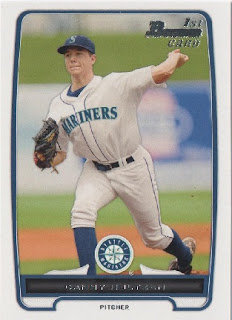 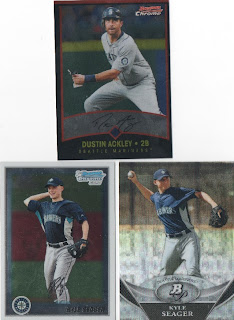 Excited about what I thought was a great purchase I had to move on. Seeing all the cards there had me worried about spending all my money at that one stop. He had a great selection of Ackley's, Seager's, and Montero's that could have gotten me in a ton of trouble. So I had to go while I still had cash left. Next up was another table with some Montero's. 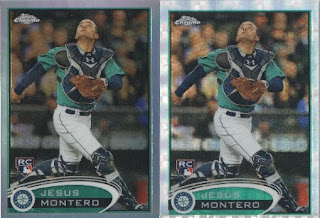 While it doesn't show very well. One is a chrome, and the other is a prism. Both cards look really great, and will be happily added into the Montero collection. The one problem with this purchase was it started to get me nervous on whether I'd have enough money. Two stops into the show and I was getting close to half of my money gone. Not to worry though as from this point on all purchases would have made Nick from 'Dime Boxes' proud. I never spent more than one dime per card, and got some great stuff.

Finishing off the Mariners additions was two last Dustin Ackley's. Both were buried deep in a dime box. Being we live in Mariners territory adding two current players cards for a dime is huge. Throw in that player being considered one of the three players expected to be the future of the franchise. I was thrilled to see them for a dime. 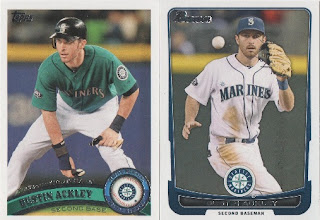