Hopefully everyone enjoyed the view on the Cactus League pocket schedules. If not check it out as they are pretty cool. Today it's time to see what the Grapefruit League puts out in the way of a schedule.

The three schedules I have are from 2010-2012.All three were sponsored by Holiday Inn, with two having their logo across the front. The 2012 schedule matches with the Cactus League 2012 in style. This leads me to believe that MLB is somehow involved in the making of these schedules. 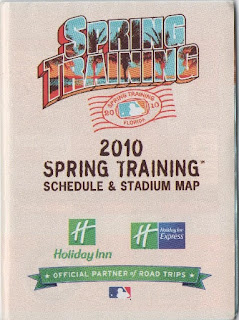 I like the postmark look right below the Spring Training.While not an amazing schedule I personally like the look, and think it gets the job done. The 2011 schedule in my opinion is pretty basic.The palm tree leaf coming in from the side makes this schedule a touch better, but doesn't save it from being a disaster in my opinion. 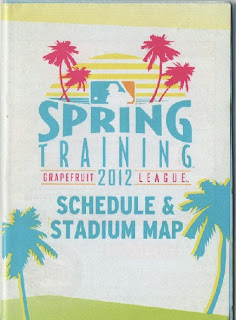 For some reason I like this design. My guess is the colors all draw me in. I like the overall design as well just the colors finish it for me. Comparing it to the Cactus League schedule from 2012 it's exactly the same design only with trees instead of a cactus. 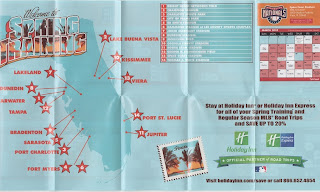 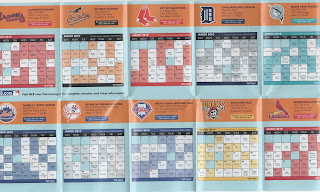 All three have this same design inside. Comparing it to the Cactus League you will see the same basic idea. The trickier part, is that the teams in Florida are all spread out throughout the lower portion of the state. This would mean a little more research is needed to find each stadium.

Hopefully you enjoyed this showing of both the spring training leagues schedules.