No Waiting For This Trade

Around a week ago, could be longer, could be sooner. Tom over at the blog Waiting 'Til Next Year mentioned Panini, and how he was still trying to complete the 2012 set. As luck would have it I had bought a few packs of the cards while doing my Monday runs late last year. Thinking that it'd be cool to help out a fellow blogger, and ease his pain. I looked through the cards, and happened to have two he needed. An e-mail was sent, and a trade was agreed to. Just wanting to help Tom out the return was no big deal. Being a blogger though Tom said he needed my address for a return, and what he sent didn't disappoint.

First let's start with what I call the stunner of the package. Tom sent a letter that did everything but apologize for what he had sent in return. Contained in the letter was a, couldn't find too much cards from your wantlists. From there it went into odds are you already have the Ackley, but maybe you can use another. As I said earlier, I only bought a pack or two. What this means is the card goes right into the binder as I needed one. 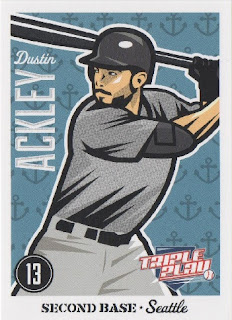 Tagging along with Dustin was a pair of mascot bodyguards. Another pair or cards that I'm excited to add into the mascots collection. I keep going at the rate I have been this year, and one of these subsets will get finished at some point during 2013 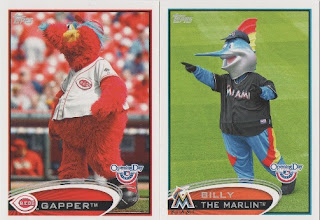 Finishing up the trade was a card that during our e-mail exchanges I had asked for specifically. If Tom would have only sent this one card everything would have been fine. This past season the team had changed affiliations so I was looking for a new card to add into the collection. Tom didn't disappoint as he sent the card. 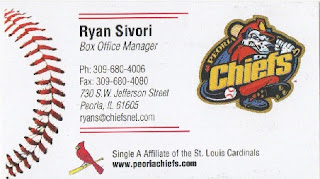 Tom, your letter sounded like you wish it could have been more. Sometimes in life what seems like a small thing is huge to the receiver. Just the one business card from the Peoria Chiefs made this package huge to me. Being able to add Ackley, and two mascot cards was insane. I can't remember which blog I read it in, and exactly how it was written. I'll give out the quote anyway as it's so true.

Some of the best trades ever have come in the simple PWE.
Posted by The Prowling Cat at 2:23 PM