2015 has been an insanely slow year for me in the blogging category. Things hit an all time low when October only saw one lone post. Puttering along we hit December and, the final three posts for the clearing of unwanted clutter.

The last of those was fifteen days ago. It's not that there isn't tons of things to write about around here. Looking around I have a stack of probably five, or more trade packages waiting for their glorious showing. Some of those are related to the clutter cleaning, two are Christmas goodies, and a few other trades.

I've even been so bad that the three claimed items from that last posting are still waiting to be sent out. For those waiting there is hope as my plan is to mail them out on Monday. Sunday will be crazy as we plan on taking down the tree, and then ending our run as the last people in the world to see Star Wars. After a planned visit to the local movie theater I will be working on getting the cards all ready for their trips.

December's slow down if you recall from the seventh clutter posting is due to the dog adventure. I was so locked into searching for the perfect dog that instead of doing blogging things I would look at the shelter website over, and over before doing other things. After all of that time spent it's ironic that the dog we finally did get was never posted on the shelter's website.


I introduce to you Miss Melody, or as the wife has me calling her. Mellie 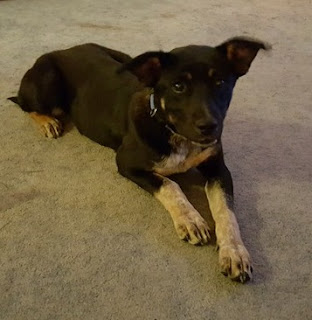 Mellie was brought in from New Mexico, and is eight months old. Odds are very high that she ends up being bigger than what I had wanted. Currently she is the size I had in mind as my prefect dog. The wife though said she wasn't against a bigger dog, and honestly was leaning towards a Black Lab sized dog.

Well she got the dog that will probably end up being somewhere around that size as she is German Shepard/Blue Heeler. Her two big problems right now are, she is basically afraid of her own shadow, and is doing her business in the house. I think once we get those two things improved she will be a great dog. Being shy was something while driving us a bit nuts right now is why we ended up picking her. She was so calm with our dog Dega, who accepted her despite being bigger than he is. Dega has even established himself as the alpha dog, and gives her some courage in scary situations.

Earlier I said she wasn't on the website. This is because on Saturday the 19th I went by the shelter to see if any new dogs had appeared. I also wanted to bond a bit more with a four month old Shar Pei/Black Lab puppy. Keeping an open mind I checked out the other dogs that had just came in, and were still unavailable for adoption. They do an intake where they get a better idea on the dogs attitude with other dogs, cats, kids, etc. During that time I walked by her pen, and thought she seemed like a good dog, but her size scared me off because of Dega's dislike for bigger dogs. That disliking was what had stopped an earlier adoption for a puppy we had fallen in love with.

Sunday came with me mentioning to the wife that I had seen quite a few dogs worth a look. Checking out the Facebook for the shelter I noticed that it said they had gotten in 60 dogs on Saturday. Not wanting to go along this left the daughter, and myself  to check out the fresh blood. In the end this was probably for the best as the daughter didn't let last times experience slow her down in looking at bigger dogs. Our first visit was with the dog Mellie was sharing a pen with. While spending that time I mentioned a couple times that last night there was another dog with her that I liked much more.

As we exited the visiting room the intake lady was putting Mellie into the pen, and clipped her information on the pen. From there it was one dog in, and the other coming out. Not to keep dragging this out we spent time with a couple more dogs including the Shar Pei before almost leaving empty. The daughter had to see Dega deal with Mellie before we left so I caved, and the meeting happened.

Now the big ordeal has been the daughter not willing to accept that Mellie wasn't brought home to be her personal pet. Once we can get her a little braver, and some better weather. I plan on taking her for some walks with the wife, and Dega so we can start losing some poundage we so need to lose. It'll be quite the journey getting her there, but like I said in the end I think she will be a great dog.

With all this going on, and Christmas finally over. I need to sit down, and get myself back in order. Hopefully I can do this soon so regular posting can happen. There have been some awesome packages that I refuse to add into the collections until they have been shared on a posting.
Posted by The Prowling Cat at 7:42 PM 1 comment:

Cleaning Out The Clutter 8- The Finale

This has gone alot slower than I had expected it to go when deciding to clear out all these items last month. If I had gotten to business like I'd planned. By now everything would already be in their new homes, or atleast heading there.

Today there will be no fooling around though as I am going to do a big cleaning house of small baseball sets. Six sets are all up for grabs, and looking for new homes. Feel free to claim one set, two set, or heck all six if they interest you. 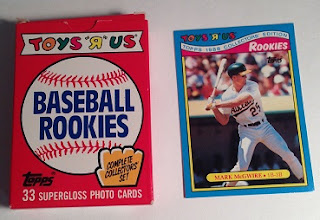 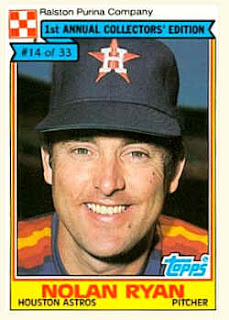 This set f 1984 cards contains the stars of that time with all 33 cards included. 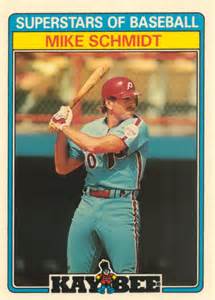 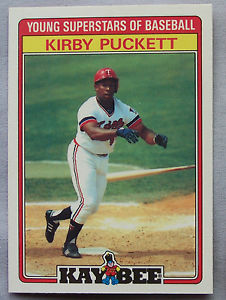 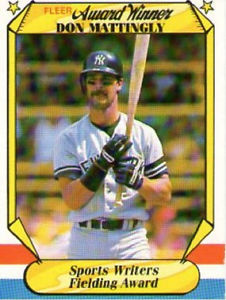 This 44 card set commemorates the award winners from 1986. Originally coming with six stickers in the box those are long gone, but the 44 cards are still in the box.

So there they are in all their glory. While I've gotten lots of thank you's from people for sending out all the treasures that have already gone out. I want to say thank you to all of you for helping me find homes where all this stuff will be appreciated for years to come.

Everything here will be available until Monday at which point the remaining sets will begin to be parted out for either player, or team collectors. If you are interested in a player or team when these start becoming parted feel free to leave a comment below. Full set claims will get the first shot, but Monday morning all bets are off, and the parting will begin.
Posted by The Prowling Cat at 2:12 PM 4 comments:

Cleaning Out The Clutter 7

With the weekend being waaaay busy it has been a couple days since the last post. I will just say we had a serious day of Christmas shopping. Closing out the day we went out to the local animal shelter, and fell in love with a sweet dog. Feeling she would be perfect we put her on hold, and went back on Sunday first thing. Sunday was to meet our current dog to make sure everything would work out between the two. Doing a quick just us without the dog to make sure it was still good. We had a good time with what was a sweet shy eleven month old dog that would curl up on our laps. After this it was time for the meeting, and to see if the cat house would have another family member. As our dog walked into the room this sweet puppy turned into a nightmare that wanted to basically jump up on our dog, and wouldn't take his hints of no. Needless to say we came home without the new member, and are strongly believing things will stay that way. It's a tricky situation as I want a medium sized dog, and our dog isn't into dogs bigger than him. No biggie as I believe it's just a sign that we are supposed to be a one dog family.

The wife is still keeping an eye on the shelter's website as she starts a vacation next week that will run through the remainder of the year. She wants another small dog, and the daughter wants just any sized. All this is a Pandora's Box I've kept closed as a big no, but now opened by wanting a little bigger dog.

Enough about the weekend, let's get back to the business of clearing out some unwanted stuff cluttering up the hobby room. 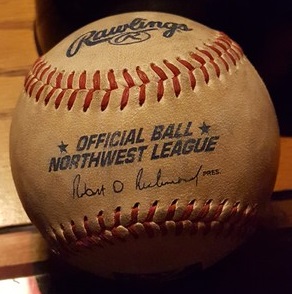 While all the information on the ball is clean the ball itself is pretty dirty. I mention it because I'm not sure if how dirty it is comes through in the picture. 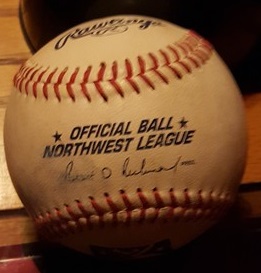 As you can see this ball has a scuff mark in the writing area of the ball. It is a much cleaner ball than the #1 baseball.

In news for the other unclaimed items from past posts. The ice cream helmet is still available until Saturday, and so is three of the fire engines series 4 sets. On Saturday they will both go away with another box heading to the Goodwill truck. I also spent some serious time at the post office mailing out a package to Billy Kingsley. This leaves me still needing an address for Julie Owens so I can mail out your treasures.
Posted by The Prowling Cat at 5:46 PM 4 comments:

Cleaning Out The Clutter 6

It's been a couple day since the last offer, but I still have more so how about we do this? 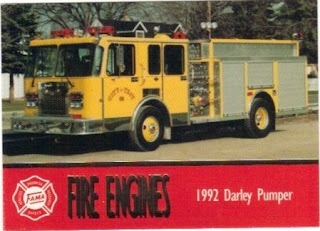 Far as I know this is the full set of 100 cards from series one. If you know anyone who is into fire engines this is the perfect set as it is loaded with information. 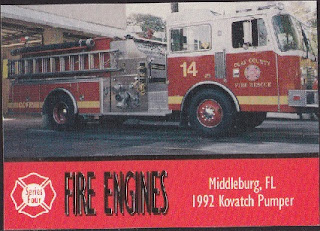 Another of the fire engine sets, and the last series I was able to collect. If you claimed the first series one of these would go perfectly with it.

Besides all these I am still waiting to hear from the following people with their addresses.
Julie Owens
Billy Kingsley

Once you get back to me I will work on getting your treasures heading your direction.
Posted by The Prowling Cat at 6:43 PM 5 comments: