Today's post is for round 1 of the Nachos Grande Blogger Bracket Challenge where 'The Prowling Cat' enters as the #12 seed.  Being a college basketball fan I embrace the #12 seed, and look forward to trying to overcome a strong writer in 'The Diamond King'. Doesn't it seem like every season in the college basketball tournament a 12 seed beats a 5 seed, and then goes deep into the tournament? The Blogger Bracket Challenge will be no different. Look for this cat to pull off the upset in round one 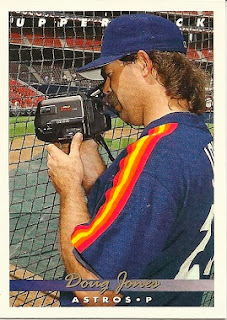 Seeing the card initially got me to thinking what is Mr. Jones doing there with a video camera? This is when I remembered an old rumor I had heard back when this card was made. The rumor at the time was Mr. Jones was a music video producer on his non-pitching days. He would hang out near the batting cage, locker-room, rain-delay's or any other location baseball players were dancing.

When he began his career Doug was sneaking around dugouts looking for any dance routines he could feature in a music video..


It was then Doug noticed even the groundskeepers liked to show-off their dance moves.


Things progressed as Doug produced his first music video. It was then he started to notice that word was getting out whenever he went to a baseball game. Baseball teams were working together on routines hoping it would lead to an appearance in one of Doug's video's.

Word of Doug's work spread so fast that even in other countries they would dance hoping for that one opportunity of being spotted by the great Doug Jones.

Then the day came when Doug created what he considered his masterpiece. With the help of the Harvard baseball team.


Happy with his work Doug hasn't been seen at anymore baseball games for years with his video camera. Will he come out of hiding, and attempt to revive his career in music video production? The rumors are he has accepted there won't be another Harvard video. That Doug has peaked, and video's like his masterpiece come only once in a lifetime.  Only time will tell...

Posted by The Prowling Cat at 5:08 AM