Not a whole lot to share other than business cards today. I will throw out a reminder that if you haven't voted go to Nachos Grande, and throw in a vote for your favorite post about the cards we were given. The voting for round 0 ends tonight. 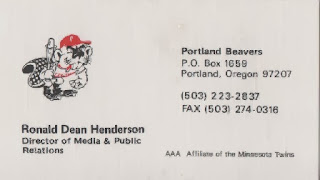 In 1978 the PCL was looking to expand, and gave that franchise to the city of Portland, Oregon. The team would remain in town until the end of 1993. Due to contract problems with the city over revenue issues team owner Joe Buzas decided to relocate the team to Salt Lake City. Among the revenue problems were how to share the profits from ticket, and food sales. The move to Salt Lake City was brisk as Buzas was still negotiating a deal with Portland while others claim his Salt Lake contract was already signed. In the end both sides never came to an agreement, and the team moved to Utah. 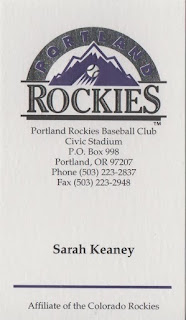 Filling in came Single-A short-season baseball in the name of the Bend Rockies. With the Beavers moving Rockies owner Jack Cain who lived in Portland decided to move his Northwest League team from Bend, Oregon. Many doubted the move as Portland was thought to be too big for short-season baseball. For the six seasons the team were in Portland it was a huge success. 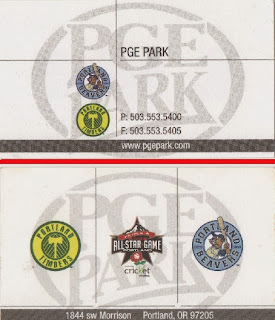 In 2000 The Albuquerque Dukes were looking for a new town to call home, and decided on Portland. The one obstacle The Portland Rockies willingly agreed to step aside, and make the move to Pasco, Washington for the start of 2001. Retaking the name Beavers the team would remain in town until the end of 2010. Forced out of town as the city of Portland won the rights to an expansion MLS team. The agreement came with the rule the teams stadium would be a soccer, and football only stadium. This left the Beavers homeless, and wondering what would come next. One possibility was to tear down Memorial Coliseum, and build next to the current Rose Garden. A group fought claiming the coliseum was a historic landmark, and in the end won the battle. Another site was met with objections by the local homeowners who didn't want the extra traffic baseball would bring. After everything would shake out the team would be forced into a move to Tucson for the start of 2011. 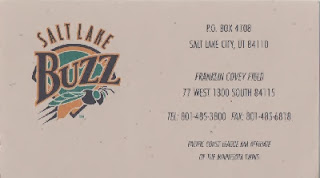 Making an agreement with Salt Lake City that he would move his team to Utah if they built a new stadium. In 1994 Joe Buzas relocated his Portland Beavers to Salt Lake City, and renamed the team the Buzz. At the time the belief was Buzas named the team using his last name, and adding a Z. Instantly the move from Oregon paid off as the team broke a 48 year old attendance record. 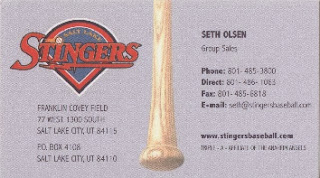 Changing names due to a trademark lawsuit filed by Georgia Tech who's mascot is named Buzz. The franchise went with the new name Stingers for 2001. That same season a new affiliation with the Angels was formed. In 2003 another change was coming for the team. Owner Joe Buzas died, and the team was sold to Utah Jazz owner Larry H. Miller 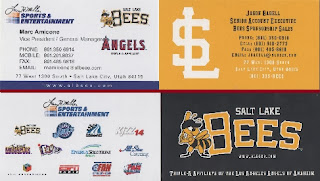 In 2005 once again the Stingers were going through another name change. Press releases announced the team was looking to return to Salt Lake's baseball roots by using the city's first ever franchise name in the Bees. Going with the change were new colors, uniforms, and a new logo. Sadly in 2009 Mr. Miller died from complications of type 2 diabetes. Currently the Bees are owned by his widow.
Posted by The Prowling Cat at 6:00 AM