After going out on Friday night I came home to a sweet surprise. I say surprise, but really it was something I had been waiting on. Just what I was waiting on wasn't as sweet as what came. The box was part of a trade with Chris who runs the blog 'The Raz Card Blog'. Not long ago Chris had a post about buying a pack of NASCAR cards. In the post he was bummed as there were no cards of his favorite driver Tony Stewart. Not being a fan of the guy an e-mail was sent offering up 8 or so cards of Stewart. 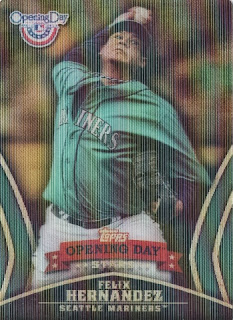 While it took a few weeks, maybe longer. Chris hit me up saying he would love the cards, and wanted to know if I had a wantlist or blog someplace. Letting him know where to look he checked this blog, and noticed i was building 2013 sets. Having a good sized group looking for a home I was in, and the trade was born. What he sent was more than I ever expected. 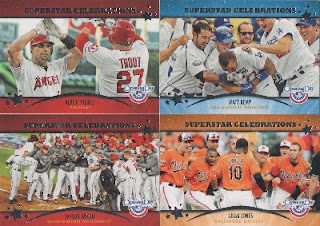 This is just a small sample of the greatness of 2013 cards contained in the box. I know by now we have all seen everything that is 2013 Opening Day. Keeping that in mind I thought why not show off some of the celebrations cards. Being I felt just like the guys on these cards when I cracked open the box, and started going through the cards. All the celebrating was due to Chris finishing up the base part of my 2013 Opening Day. Included with that was doing some serious damage to the subsets. I've been wanting to do some work on the Opening Day set, but my closest Target haven't had packs for awhile, and that stopped the progress on the set. Now all that is left will be tracking down the inserts.

Opening Day wasn't the only set Chris gave some love too. He hit the flagship set pretty hard. 51 hits to this set was the damage when he was finished. Sadly the flagship has been getting neglected in my collection more than any other set. I did buy some 'Chasing The Dream' cards recently, but outside of that is has been my forgotten set. 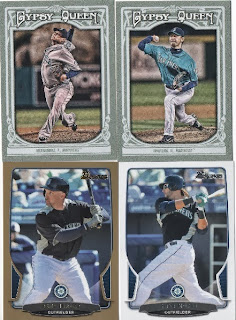 Seeing that I live in Oregon which is Mariners territory. Chris included some cool looking Mariners cards into the mix. The four above are just a sampling of what he sent for the Mariners. These are just my four favorite players from the Mariners batch so they get the blog time. Put me down as one of the guys who was bummed when Morse was traded. I do realize that it needed done as the outfield was too packed. Its just a bummer to see him having to move on. Sometimes it's strange how we get bummed to see guys who go that when I signed him I was asking why they needed him. The Mariners had a full outfield, and for some reason signed outfielders in the off-season. Can someone explain to me the thinking that goes into signing older players for a position you are deepest at? 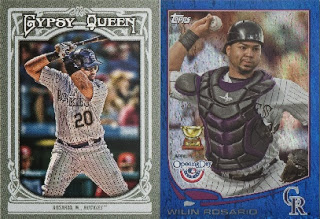 As a Rockies fan I saved the best for last.. For some strange reason Rosario is the one guy on the team I like the most. Following in a close second is Juan Nicasio who I keep hoping will get it together at some point. Hopefully Wilin can keep producing, and become a top notch catcher. He had a decent 2013 to build on for future seasons.

Once again. Thank you for a great box of cards Chris. Expect my cards sometime this week as I've had to wait until today to mail my half out. I can only hit the Post Office on Monday's, and it seems like last Monday was some holiday. For the rest of you go check out Chris' blog 'The Raz Card Blog'.
Posted by The Prowling Cat at 2:30 PM