After doing football related posts almost all week it's time to get back to the meat, and potatoes of this blog. Baseball related items with that basically being the weekend ritual of baseball business cards. 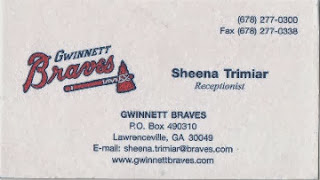 Relocating from the city of Richmond to Gwinnett in 2009. Atlanta moved the franchise after years of trying to get a new ballpark in Richmond, and coming up dry. Despite The parent club making this seasons playoffs the Gwinnett Braves didn't fair as well. The team had a disappointing 2013 going 60-84, and last place in the South division. The Braves are the second closest triple A affiliate to its MLB team with the Tacoma Rainiers, and Seattle Mariners being the first. Using the name Red Barons during the time frame of 1989 until 2006. The name originated as a tribute to the early teams from the area before the Red Barons. The teams were the Scranton Red Sox, and Wilkes Barre Barons. Despite struggling on the field the team drew well with over 500,000 fans a season. The Philadelphia Phillies affiliate struggled through the 90's as well. Things did start to get better in the 1999 season as the team started getting tons of talent. All this talent is what has helped the Phillies become the team they are today. 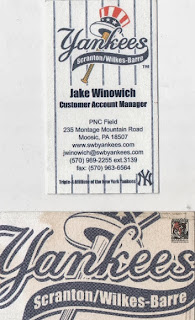 2006 came, and the franchise went through many changes. First is the team became affiliated with the New York Yankees. The second change is they dropped the Red Barons name, and became the Yankees. During this time the team has had the most successful seasons in team history by winning five straight division Championships. 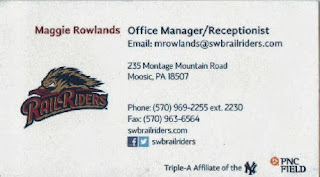 Early in 2012 the team was sold to a private group which was a joint venture between the Yankees, and Mandalay Bay Properties. After seasons end the new ownership expressed interest in changing names once again. In November of that same year the team announced a name change to the RailRiders. The name chosen from more than 2700 entries pays homage to the first trolley system which was created in the Scranton/Wilkes Barre area. Sadly the first season under the new name didn't go well as the team first just above last place in the division.
Posted by The Prowling Cat at 6:00 AM