Usually Saturday's are reserved for the baseball business cards in my collection. Today is going to be a little different though as I've got a big day planned. I won't get too into the plan as hopefully there will be a future post on the day. Until then I have a new business card into the collection to share.

On October 20th I sent this artelope out.

With the baseball teams starting to hit the point where returns are getting harder, and harder. Throw in that I am getting pretty close to having a card from every team. I was looking to branch out the collection a little. One of those branching outs was to try, and get a card from all the college bowl games. Last year I started fairly slowly as we only sent to three bowl games. Our return rate was a decent 2 out of 3. With bowl games coming again soon I sent out another two requests so far, and on Friday I got back the New Mexico Bowl. 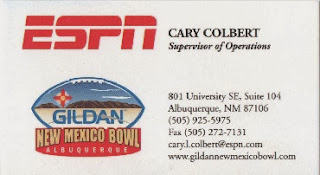 Being played on Saturday, December, 21st this year. The Gildan New Mexico Bowl pits a representative of the PAC-12 against a representative of the Mountain West. The 2012 game was a thriller with the Arizona Wildcats winning by scoring two touchdowns in the final two minutes to beat the Nevada Wolfpack 49-48. Hopefully this seasons game will deliver another close game.

Until tomorrow keep in mind I am in the Nachos Grande Blogger Bracket Challenge. Some great posts were written in each of the various groups. So go read the posts, and place your vote. I would appreciate your vote as I am currently trailing, but hope you will vote for the posts you liked best from everyone.
Posted by The Prowling Cat at 6:00 AM