The Cat Turns One

One year ago from today 'The Prowling Cat' came to life. The idea was like most blogs to share my experiences with cards, and to interact with others who love baseball cards. While I run on my own tangents due to the hobbies of business card collecting, pocket schedule collecting, and other baseball items. This past year has been a great experience. 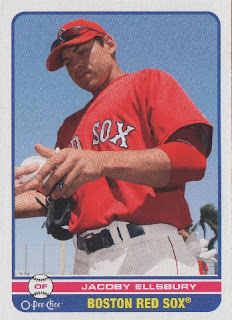 In baseball cards so many things have changed from the way they were when this blog first started. When it comes to the players I collect its a constant process. I started with a list of seven if I recall, and recently trimmed it down to the current four. There are a couple players I pick up cards of every so often, and are a sort of secret collection. Eventually some of those may show up on the player collection list, or maybe they won't.

The wants for baseball card sets has grown by an insane amount. When this blog started there were maybe half the amount of sets being worked on than there currently are. As I get more, and more into collecting the list may continue to grow. Who knows what sets are out there lurking that will peak my interest, and become something I just have to have.

The greatest part of this past year has been the trading. Before starting this blog I am sad to admit, but when it came to baseball cards I was a taker. The online group would have people offering cards they were looking to get rid of, and I would ask for what I needed, and send only a couple unwanted cards. I'll say it, and own it. I was one of those traders you never wanted to trade with more than once. Since joining the blogging community I have done everything possible to change that, and it's all thank to you great readers, and bloggers out there. It would be fair to say I've done a complete 180.

The few cards shows I went to this year I would see a card, and a blogger I've traded with would come to mind. The card would then come home, and be on their way to a fellow trader. Not even thinking for a second what or if anything was coming back. Earlier on I even got a Griffey Jr. SLU for fellow blogger 'The Junior Junkie', and we had never traded until sending him an e-mail saying I had something for him. Times like this has made this past year such a great memory. Every memory has been thanks to all of you out there allowing me to share my little part of the world with you, and sharing yours as well. I have learned so much for reading all the other great blogs out there, and this is why I created 'The Prowling Cat'.

Another fun thing atleast for the daughter, and myself is the artelopes. This idea came from the blog 'Baseball By The Letters'. Not long after starting this blog he did a post about decorating envelopes to improve your chances on autograph requests. I took that idea, and started it in hopes of increasing my odds on getting business cards for the collection. The success rate has been incredible as I added some very tough business cards to the baseball collection. Things went so well with this little project that I almost completed the missing teams. Only a couple held out, but I won't be stopped as this next year we will try again.

Once again I want to say thank you to all of you out there who read my posts. Thank you as well to all of you out there who write your own blogs that both inspire this blog, and entertain me. I look forward to many more trades with those of you I already trade with, and hopefully making trades with some new people.
Posted by The Prowling Cat at 6:00 AM