One of my crazy quirks in life is that sometimes I like to collect the things not everyone is in too. On Saturday we added another of those when we stopped in at Kmart to check out the Christmas decorations. While there we came across something that we have been collecting for what currently stands at three years now. 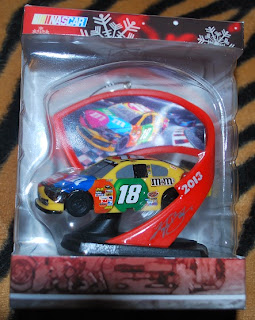 There is just something about Christmas that draws me into stopping at all the major chains to check out their Christmas Stuff. We are huge Christmas fans around here with the wife the biggest fan. This leads us into stores checking to see if there is something we need to add into the Christmas decorations around the house. More times than not we leave disappointed, adding nothing. Since 2011 though we have been finding one thing at Kmart, and it is the Kyle Busch race-car ornament. 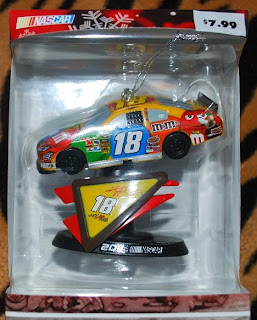 The crazy thing is when we bought this ornament the intent was to put it on the tree with all the other ornaments. Like some people we have the black hole in the house where things seem to disappear. That area where things go, and aren't seen for a long period of time. In our house there are two of these spots, and the first ornament fell into spot number two. The first location is on the dining room table. with only three of us living here we use half the table so the other half has become a black hole. Things seem to pile up until the step-son comes for dinner, or we do a big house cleaning.

Spot number two is what I believe to be a very common location, the ever popular computer desk. Sometimes it runs next to the desk, but we will count that as part of the desk. Bags will be brought in, and placed next to the desk only to be found by accident. This is the craziest as more times than not its just a lone bag sitting there until one day one of us decides to see what is with the bag sitting next to the computer desk.

Falling into this hole it wasn't until after Christmas before it was discovered. Much too late for an appearance on the 2011 Christmas tree. Failing to make it on the tree it went into what was at the time a possible third black hole. The tricky catch-all-room, now referred to as the hobby room since my taking it over a year ago. Found while clearing the room for my take-over it has since made it onto a shelf with the Kyle Busch collection. Soon afterwards the 2012 version joined the shelf. 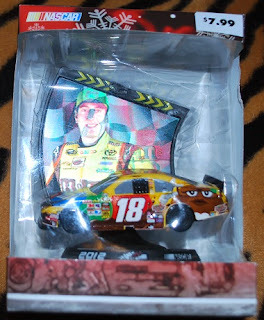 Purchasing the 2012 ornament meant this was the start of a collection. If you ask me one is just a curious buy. Two is starting a trend that odds are will continue, and in this case has continued. Now all that is left will be seeing how long these keep being made, and if I keep buying them or finding them.
Posted by The Prowling Cat at 2:04 PM