After doing one of these back in June while on vacation. I am going to do another post about a player who had a nickname using a cat reference. The plan is I will do one of these every so often with no schedule on when they will be done in mind. This means it could be months before another one of these shows up again. Until then lets all bask in the learning about another baseball cat. 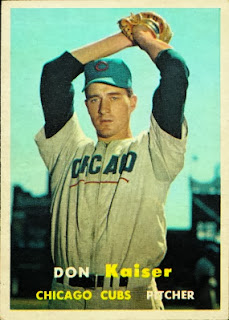 Playing baseball in high school Kaiser was an animal with a 49-1 record, and seven no hitters. Despite the strong showing Kaiser was in college on a basketball scholarship when the Cubs came calling. Signing the 6 foot 5 inch right hander in February of 1955. Due to rules in place at the time Don was required to stay on the roster where he made his debut in July as a reliever. This is where Don would spend the remaining portion of the season as he made eleven appearances from the bullpen.

1956 came with Kaiser not making a start until June 2nd. The start was worth the wait as Kaiser pitched a two hitter, and beat the Brooklyn Dodgers 8-1. The season wasn't fantastic though as in 22 starts Kaiser went a disappointing 4-9, and five complete games.

1957 would get worse as Kaiser spent the season playing between Chicago, and the minor league Portland Beavers. Making 20 appearances, and going 2-6 for the Cubs with a 5.00 ERA. In December Kaiser would be involved in a trade with the Milwaukee Braves. The trade didn't change Kaiser's fate as he spent the next four seasons in the minors before retiring never playing in the majors after 1957.

Still alive Kaiser lives in his birth state of Oklahoma, and went into law enforcement for the following 30 years. If you would like to see a letter from Kaiser then please visit 'Baseball By The Letters' where in 2011 he showed a letter in response to an autograph request.
Posted by The Prowling Cat at 2:30 PM