It Hurts To Watch- Version 4

While I have done a couple more of these that had names like "The Chipper Edition", and "The Disorganized Edition". Only three have had used the version name so I'll just keep the count going when I don't have a catchier name. Much like most the others this version is inspired by another trip to the coast. So inspired that while watching the waves coming in I thought about doing another of these.

For any newcomers this is how these posts run. There are normally three cards to the set. The first is an incoming play, the second is an actual play, and the third is the final result of a play at home plate. I then either talk about the three cards or if possible attempt to run the story like a play at the plate. Today's version is going to run through the weekend at the coast. 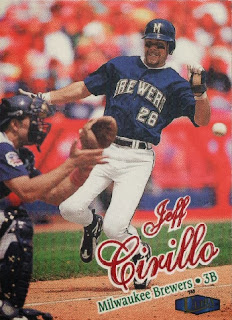 Things got off to a great start on Friday as work slowed down enough I was able to come home early. Loading up the car there wasn't much left to do once the wife, and daughter arrived home. This was great as with it getting dark early these days I wasn't looking forward to driving the entire trip in the dark. While part of the drive was still dark it wasn't the entire drive. Arriving in town at six we unloaded the car, and headed to get a few snacks, and pizza for dinner. Once finished we ate dinner, and hunkered down for the night. 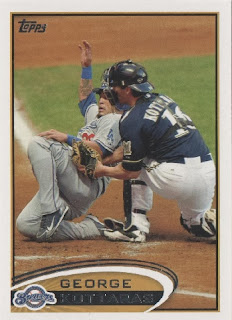 Saturday I woke with full of hope, and dreams. The plan was a simple one that I'd thought about since the wife mentioned just over a month ago she wanted to reserve the beach house. I would do my usual quick trip to the antique mall just up the road. Hopefully I could find a couple cards on the cheap like I do every trip. From there I would make the eight or so mile trip south to the card shop. I was excited about going to the shop as on our trip at the very first of 2013 this very shop was inside a used sporting goods store in town. Since then it had moved south to from what I was reading is a much better location. New shop location, and for me a brand new me since that trip meant we were about to get our baseball cards on.

Going into the antique mall is when I ended up like our poor base-runner. I was tagged out at the plate. Going in I did the usual walk around, and planned on hitting the usual boxes of cards the baseball card shop usually has at the mall before leaving. Instead of the usual four boxes jammed full of cards sitting there. Two 80% empty boxes sat in their place. Neither containing a single baseball card, just football cards. Then the worst sight that could follow was next. Directly to the left was the sheet of paper with the shops address crossed out. Above the huge "X" was the word MOVING. The dream was gone as there would be no baseball cards this trip. 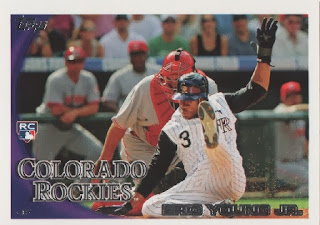 Sunday was a great day as I needed new shoes, and so the daughter headed with me up north to get shoes. No cards, but it was a great day as we hit another antique store, and she got to check out jewelry at some of the other outlet stores like she loves to do. We did get a few things, but nothing worth sharing here.

Monday was the basic cleaning the house, and heading home stuff. In the end we were like Eric Young Jr., and safe at home. Just still bummed about there not being any baseball cards in this little journey.
Posted by The Prowling Cat at 2:30 PM