When it comes to my collecting interests hockey comes in as the bottom of what I collect. That doesn't mean I don't have some items from the sport that I enjoy collecting. What it means is what I do collect is very limited. One of those is schedules from the Utah Grizzlies. Thanks to fellow schedule collector Alan these are the latest additions to the Grizzlies schedule collection. 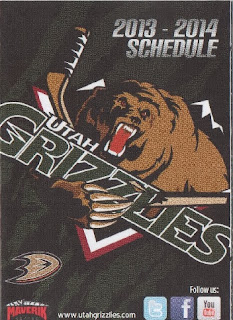 The few hockey schedules I do collect all meet one strange requirement. I have to like the name, and logo the team uses. While there are many teams with cool logos and just as cool names. For some reason only a very small handful of teams speak to me. The Grizzlies hit on the logo thing, and go even farther in becoming one of those teams. 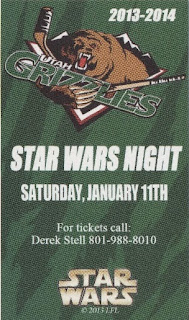 Growing up in Utah they have the added hometown region going for them as well. While the team didn't exist while I was living in Utah. I still collect schedules for all the team from the area. Some get more rooting than others, but I still root for them.

Playing in the West Division of the ECHL which is hockey's version of Double A. Currently affiliated with the Anaheim Ducks. The Grizzlies haven't had a great start to the 2013-2014 season. As of this writing the team is 3-5, and in 7th place. Since joining the league at the start of the 2005-2006 season the team has made the playoff every years except 2006-2007. Hopefully this means the team will regroup, and make the playoffs this season.
Posted by The Prowling Cat at 2:30 PM