The title of this post is kind of misleading. The cards I'm about to show are from two teams that at the time were anything but superteams. Well one wasn't a superteam, the other wasn't all that bad. I'll go out on a pretty stable limb, and say they still aren't that super. Our first winner is. 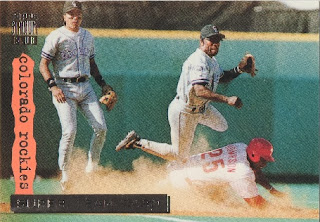 This is one of those cards I always forget I even have. The funny part is it's a card I keep thinking about trying to get for the Rockies collection. Maybe instead of putting it back in the hard case I'll finally add it to my general Rockies stuff binder. The card is another of those reminders that the collection still needs some work in getting organized. Something that I should do rather than just sitting here playing around at times. 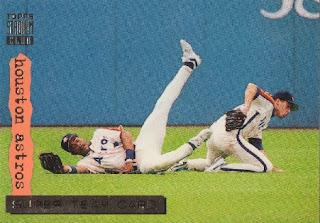 I wasn't totally upset when I originally pulled this card.The Astros weren't really a bad looking team, and actually had a shot at making the playoffs. This would have meant the card was a winner. It wasn't meant to be though as the Astros finished 2nd in the division, and didn't make the playoffs.

Hope was strong for me cashing this card in when the season started. For those that know nothing about the superteams promotion here is how it worked. This was a promotion for the Stadium Club card sets, and was done in all the sports. Cards for every baseball team were inserted in packs with these being very hard pulls. If the team on your card won their division then you sent the card in, and got a set of team cards for the team with a special division champions logo on each card. If your team moved on, and became the National or American League Champions. You received another team set with the League Champions on each card. Things got very interesting in the World Series. If you were lucky enough to have a card for the World Series Champions you received a full set of Stadium Club for that year with World Series Champions on each card.

I remember these cards well, and that the prices for cards were insane at the time. Even being a new team to baseball the Rockies cards carried a decent price. The Atros were a strong team with a price that still leaves me wondering why I never sold the card when I got it. The cards that could have been added to my collection by selling this card still haunt me. I did have success with one Houston team in this promotion. The Rockets were the NBA Champions, and a card I had pulled buying basketball cards. Unfortunately due to a couple moves, and a divorce the full set of cards disappeared along the way. Odds are they'd still be sitting in their box someplace if I had them so no biggie.
Posted by The Prowling Cat at 10:33 AM