The Emeralds Use The Force As you can tell from the post title, and my lead picture. On Saturday we went to the Eugene Emeralds, and it was Star Wars night. You could tell things would be cool starting with the Sasquatch logo, and the group all gathered at the concourse as you entered. Then if all that wasn't enough we got to witness Darth Vader throwing out the first pitch. 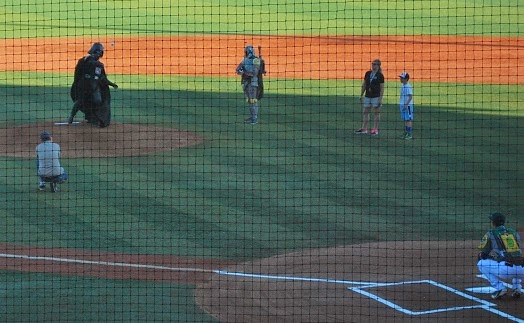 Adding to all the fun, and the thing that sealed the deal for me when the wife mentioned going to a game. The Rockies affiliate the Tri-City DustDevils were the visiting team. While I might have seriously considered going anyways, the DustDevils being in town was the clincher.

Eugene went all out on this night by having special uniform's that represented Boba Fett. 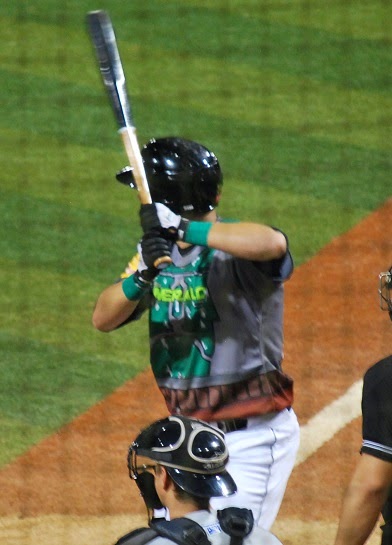 During the game there was a silent auction for the uniform's with the winner's taking the jersey home after the game. While I'd love to one day have a special game jersey from the Emeralds these were not the ones. Personally I enjoy the whole Star Wars thing on a certain level, but I'm not one of those fans that goes nuts over Star Wars. Having a jersey like these would have been just too much Star Wars in my life.

Another of the great things that I enjoyed despite being a fan of the team. Was the way they represented each player on the scoreboard. 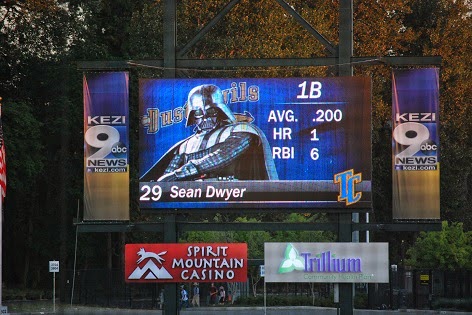 This was a huge step up as the team usually has just the team logo, and no picture. Besides, being the visitors they could be considered the villains for the game.

The game itself was very interesting. We had some loudmouth sitting directly in front of us who would not shut up. So whenever the Devils did something I would go off, and try to be annoying myself. Even got a few laughs at some of my comments. Sadly though the force was with the Emeralds as they beat Tri-City 5-2.  The difference was Tri-City not taking advantage of a couple big scoring opportunities with no outs, and multiple runners on base. Overall it was a great time, and has us already talking about going to a game this Saturday again.
Posted by The Prowling Cat at 7:08 PM