Staying Busy For The Weekend

Talk about a busy weekend here at the cathouse. One week ago I got my mojo back on wanting to finally get my hobby room started, and hopefully finished soon. As anyone who comes around here often enough knows I was hitting the home painting project hard. Then my desire came to a screeching halt, and has been slow going ever since. Just as it left it came back a week ago, and screamed lets get to work!

Getting all the daughters stuff out of the room was the first goal. Spending a few hours as she was actually ready to get it done herself. We had the room pretty close to striped down of all her stuff. Part of me believes her getting that same desire to get her stuff out that I had has really started to keep this train running. Then as I was starting to salivate at the thought of starting the painting process.

That is when a huge roadblock presented itself in the way of the wife. As we finished up she commented that I've had all this stuff set aside for a garage sale, and putting it all in the room, and getting it ready would be a great idea. The last few months me would have put all the stuff in the room, and sat back for a few weeks. The train rolling along me put everything in the room, and signed up on the back-up vacation calendar for Friday off. It seems that Friday has become the new Saturday for garage sale people. Not knowing if I was doing a Friday, Saturday sale or just a Saturday sale I got everything ready. 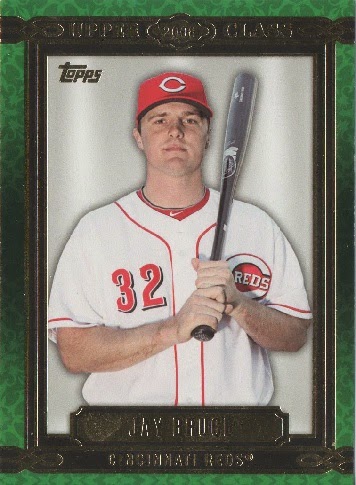 Friday came, and I made my way to work. Sitting there ready to go the boss looked at me, and said those magical words I wanted to badly to hear. "Would you like to go home?" SOLD!! Realizing we weren't completely ready as I came to the realization it was a Saturday only sale. I was forced to make my way to a certain big box store to purchase something so we could get change. Nobody had gotten change since we weren't doing this until Saturday.

Being a baseball card collector, and blogger the first thing that came to mind was a quick pack of cards. Sadly this retailer's card section has been growing ever so smaller as other collectible stuff is moving in on the baseball cards. Gone are the small ten or so packs of cards. All that there is to choose from are hanger packs, and boxes. I settled on a pack, and went to pay, and get change.

Needless to say the wife was right. Friday is the new Saturday when it comes to garage sales around here. We had a great Friday, and sold a bunch of things I thought were going to end up making a trip to Goodwill. Saturday not so much as we barely had anyone come by, and cleaned up earlier than planned. A quick nap followed, and then a game in Eugene which I will post about sometime this week. Hopefully that time will be Tuesday.

Sunday brought more life into me getting things done on the room. The day started by watching some NASCAR, and doing work on the room during commercials. If you watch NASCAR you know that there is tons of time to get things done as commercials seem to be mostly what they show during races. After the race a trip to the store for primer, and the first coat went up to cover the current color. A color that closely resembles this. 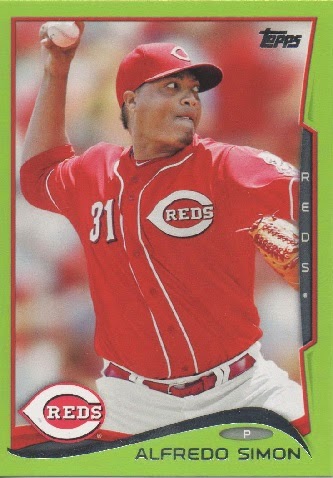 Ours is a little more to the lime color, but you get the idea. Could be why these cards don't drive me nuts so much like it does others. Today's plan is a second coat which will hopefully set me up for my color choice. If it doesn't complete the change then I'll spend another day after work laying a third coat down. All this for what I am hoping will be the painting this coming up weekend. From there it's all running downhill as I get to start the process of moving things into the new room. Once that's done maybe I can finally cross of getting the hobbies in order. I doubt it, but I can always dream can't I?

((Note:: All five cards came from the hanger pack, and if you need any can be yours for the mere price of e-mailing me your address so I can send the one or more you'd like.))
Posted by The Prowling Cat at 9:01 AM