With the game not being until 7:10, and it being a bobblehead night. We had the plans of leaving the hotel for the stadium early. Before doing all this the wife wanted to head over to a big box store for some sunscreen. We had seats for the outfield section which was in full sun on Friday's game so she wanted to be prepared. This was in-case we couldn't upgrade our seats which I will get to in my game related post tomorrow.

As the wife started getting ready to head for the store I did what any baseball card  blogger would do. I cracked into the smartphone and did a quick search for any possible card shops in the area.

Not only was there a card shop. The shop happened to be right across the street from the big box store. Then to top it all off this was less than two blocks away. Now all that was left is to convince the wife I needed to stop in, and see what they had to offer. My plan was in motion as I remembered that I still needed six card pages for storing schedules, and hopefully the Colorado Rockies police set I picked up at the coast.

Much like most of us bloggers wife's or girlfriends she understood, and was willing to stop in. Heading in for pages, and a quick search for cards the wife stayed in the car with the air conditioner running as it was insanely hot. Not having any six card pages I started in at a huge box of cards. Full of nothing, but newer young players I thought why not add or start some secret player stuff. 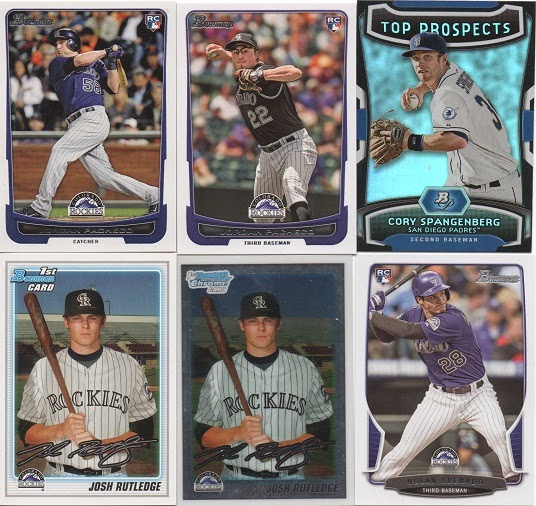 Next up I found some new additions to the main players collections. 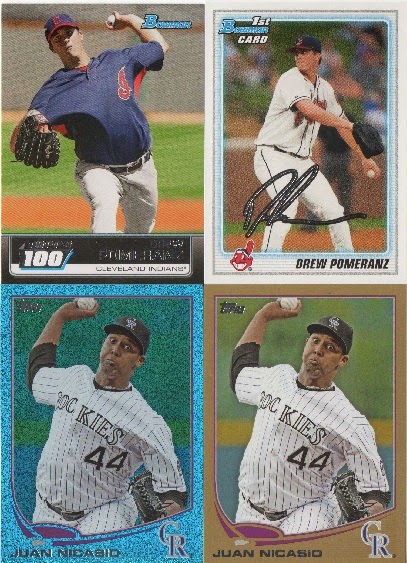 While looking at the cards to figure out cost the guy commented on Nicasio's card. Never thinking about it until he mentioned the card. It does have one of those looks that makes you laugh a little. His comment was to the effect that if Nicasio ever saw his card he'd probably wonder why they used that picture with his face all weird. If he hadn't mentioned it I odds are I would have never noticed. I was more into that it was a gold card, and the blue slate (think that is what it's called). Two cards I honestly never thought would make their way into my collection.

About this time the wife called, and said it had been around half an hour. Mentioning she was burning gas by running the car. She followed up with why not take me to the hotel, and come back. Quickly I mentioned to the guy in the shop helping me my plan, and I headed out. Arriving in the car the wife let me know this is what we should have done the second she noticed the store. I say this because it wasn't a regular type of card store. This place had baseball cards, baseball memorabilia, and gaming type cards. 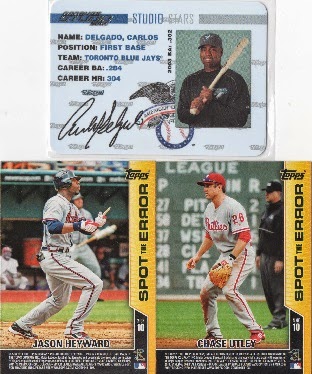 Upon returning I went straight back to the boxes, and hit a few cards for sets I've been working on. The Spot The Error cards now leaves me missing only #10 to finishing that subset.  The 2004 Studio Stars card is something I need to make a wantlist for once I get the new hobby room completed.

Closing out the goodies was three cards I found in the final box I had time to search.

This could have been an all day adventure if I had more time. That wasn't meant to be though as we were heading out to the game a little early due to the craziness that surrounds bobblehead giveaways.

Preparing to leave I stopped in my tracks when I looked over, and spotted a 2008 J.J. Putz bobblehead. Giving it a few minutes of thought as I'm used ot buying my bobbleheads from Goodwill on the cheap. In the end I decided at only ten dollars I could give in, and add it to the collection. 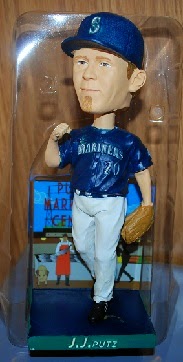 We both seemed to enjoy the area the hotel we stayed at is in so staying here might be a possibility for next year. Everything depends on what our usual hotels charge for a stay. If we do odds are I will be able to hit this shop again when we do. Until then I can just be excited about the finds I made this time.
Posted by The Prowling Cat at 9:00 AM