On Saturday we had the three times a year world's largest garage sale thing for the summer happening. Being I missed the April one due to the wife's wreck a part of me wanted to hit this show. There was one problem that was preventing this from happening. My company picnic was on the same day, and the wife seemed pretty interested in going. Then Friday came around, and she had second thoughts about going. This gave me the opening I needed to mention the garage sale event.

While talking about it she could tell I really wanted to go, and hit me with a surprising twist. I wasn't going solo on this trip as she wanted to come along. Having a companion for the journey sounded cool as she is also so accepting of doing Goodwill stops on the way home too.

Getting up early we made our way to the show right as the gates opened. Still needing to park we found our spot, and headed in for the bargain hunting. Starting things off it didn't take me long to find a treasure to take home. 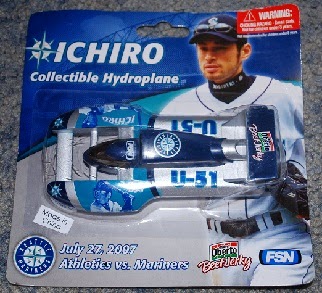 According to the back of the card this is number two in the series. How many of these there are I couldn't tell you. What I do know is while in Seattle watching the Mariners one of the guys told me about how much he missed these.

This was my first chance to break in my negotiating skills. The original price was five dollars, but I brought it home for a mere three dollars.

From there it took awhile before I came across another goodie that wanted to come home.

This I got for two dollars, and goes with my growing collection of these cars. It is one of the Cartoon Network cars that were raced long ago. I'm trying to get one of each car as I just think they look cool. The tricky part is I already have this car yet I don't. Not only is this a cheaper version of the one I already have. The better version has Velma on the side while this version has the mummy. If I can find room for this car it will have a home. If not it will disappear either now or later to make room for either another car from the series or something totally different.

Unfortunately this was the best I could do at this show. The wife didn't do too bad as she came away with two new pans including a sweet sauce pan that was in the box unopened. I did see two other items one a small Rockies banner, and the other a pack of 2003 Mariners cards from a giveaway. Neither person seemed interested in selling their stuff as they couldn't be bothered to get out of their chair and acknowledge my existence.

After leaving the show we went out to eat, and then started to make our way homeward. 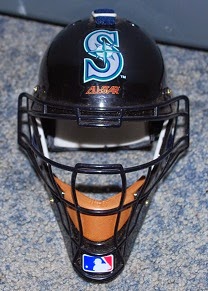 On our last stop I snagged this mini catcher's mask. Sometime last year I got the Rockies mask so now having the Mariners means my collection is complete.

Not doing as good as I had hoped in finding things. I was still pretty pleased with what I did find. Something I found interesting at this show was the amount of overpriced junk wax cards. Last year I hit all three shows, and saw maybe two binders of cards in all three shows combined. This show had lots of cards everywhere, but nothing that really interested me. I did give a quick look at a football binder that if I collected football would have been well worth the time. Looking back it is something I should have possibly thrown an offer on, and found some people to send the cards to. The first page had what looked to be some late seventies or early eighties stuff. It's amazing how we will think about these type of things later, and when it's too late to change things. Just something to think about if this opportunity presents itself in the future.
Posted by The Prowling Cat at 9:00 AM