Got back last night from what has been an almost two week vacation. If you've been reading the few posts that were done while on vacation. You already realize that I started things off with a bang by going to the Eugene Emeralds followed by the Salem-Keizer Volcanoes. From there things started to get real busy as Saturday morning was the official start of all the fun.

Heading out fairly early as all we needed to do was load everything into the car. We arrived at the coast by noon, and unloaded everything before making a trip to the store for our five days worth of food supplies. After finishing up this small stop I was off to the antique store that has become a staple of my coast trips.

Sadly I have some doubts on how many more of these I will be getting to make in the future. While starting to do my wandering I noticed that there were a fair amount of empty booths. To be exact an area usually full of merchandise was nothing more than a big empty hole. The makeshift half walls were even gone, so when I say a big empty hole I mean a big empty hole. Adding to my fear that this place isn't doing well was one of the stores biggest dealers were cleaning out their merchandise. Since I didn't go back in before we left town to see the new hole. I can't say what things look like, but the dealers section was bigger than the section already empty. Hopefully I'm just being paranoid as this has been a wonderful stop for me that has helped me add something new into the collection every trip I make.

With that out of the way lets get to the goodies as I didn't do too bad. Starting off the treasure hunt I walked around a corner, and found this thing staring back at me. 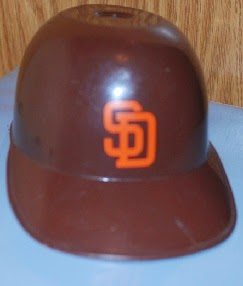 I've seen this helmet there many a time, but the three dollar price tag has always scared me off. This time the tag was a much more willing to pay price of one dollar. Thinking maybe the seller had seen the error of his ways I had to bring it home. Another few rows later I would realize that the dealer still hasn't seen the error of his ways. The helmet I had was a different helmet as the three dollar version was still sitting on a shelf.

Making my way to the lower level of the store the search was coming up empty until spotting these near the end of my journey.

I'd seen these on a past visit, but never pulled the trigger them. A few times I'd even kicked myself, and wondered why I didn't bring them home. Now I no longer have to ask myself that as here they are.

They do leave me wondering one question that hopefully someone out there can answer for me. Where are they from, and what is their deal?

After gathering up my treasures, and finding nothing else of interest I made my way to the cashier, and headed back to the house. The remaining days at the coast would bring nothing like these as no other shops were in my path. The weather was beautiful, and spending time on the beach became more of a priority than heading to shops.
Posted by The Prowling Cat at 1:21 PM