On Saturday the plan was to try, and finally complete the daughter's bedroom. Sad to say we need to make another stop to the store for two more boxes of wood flooring. What that means is the room still needs work, and will hopefully be finished today. From there we will start getting her moved into the room, and be prepared to start working on my future hobby room in the near future.

Enough about that though, and to the reason for the post title. While heading out to get the new flooring we made a stop at our closest Goodwill. Roaming through the aisles nothing of much interest hit me until getting to the glasses aisle. On the bottom shelf was this goodie. 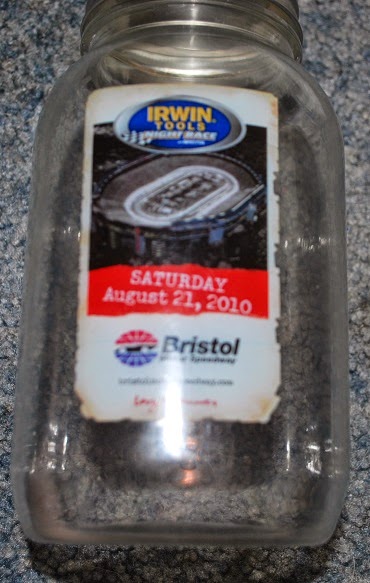 It's a plastic jar that I would assume had some sort of drink in it you bought while at the race. Normally I would have left this jar there as it doesn't look like much. The reason I did pick it up though was while killing time for a few seconds. I stopped, and did a quick internet search to see who won that very race. That is when I had staring back at me the fact our favorite driver Kyle Busch won. Thinking it would be cool to have something related to a race that Kyle won I thought for 99 cents why not get it.

Heading out to the car, and eager to show off to the wife my new found item. She looked it over, and having a better memory than me dropped a tidbit on me. That was the results of racing for that weekend.

Starting the week off on Wednesday night by winning the Camping World Truck Series race. Kyle set his sights on the Friday night Nationwide Series race. Winning the race, but not without controversy as Kyle later admitted to wrecking Brad Keselowski late in the race. Kyle added salt to the wound by mockingly rubbing his eyes like a crying baby.

Looking for history in the Sprint Cup Series race on Saturday night. Kyle avoided any altercations with Keselowski as the two barely ever crossed paths. When the night was done Kyle crossed the finish line first, and became the first driver ever to pull the NASCAR sweep.

Getting this thing had the wife talking last night about possibly adding another big item from that weekend eventually. That is if we can still find one, and then afford what it will cost. Back in 2010 they did a special Bristol sweep 1/24 set with all three vehicles. The display case runs over a hundred dollars so the cards themselves have to be much more. Odds are that is a pipe dream, but even if those never make it into the collection atleast I have this momento from the week.
Posted by The Prowling Cat at 10:38 AM