Since starting this blog, and getting back into card collecting I have done a few things that haven't been done for awhile by myself. The list of things being going into a baseball card shop. Before getting back into cards I had gone a few years earlier, but was lost. I had no idea on anything as the experience had changed since my last visit in the early 90's. Another was going to the monthly card shows they hold up in the Portland area. An event that I have enjoyed doing three or four times last year, and twice this year.

Now I can add another to the list of things I haven't done in awhile. On Sunday while sitting around playing on the internet I decided to see if there were any cool Wilin Rosario cards on the bay, and I saw this little beauty. 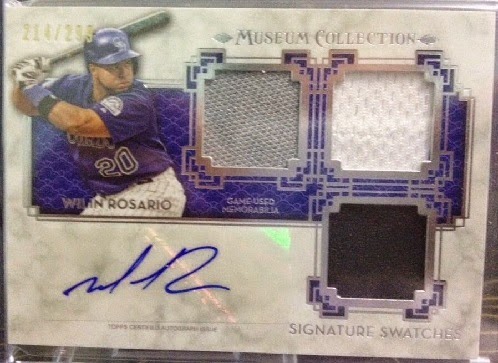 From the second I saw it I had to have it.There was just one major roadblock between me, and this new card. That block was the fact I haven't bid on ebay for a few years. During that time ebay has gone through a few major changes, and I wasn't very knowledgeable on those changes. My last purchases were when I was just starting the pocket schedule collection, and buying some hard to find stuff. Since those days paypal has basically become the only form of payment. If you can still do checks or some other payment option I haven't seen it yet.

Lucky for me the wife bought something just over one year ago, and had set up a paypal account. With that out of the way I was able to make a bid, and win that card.

All this is what led to the title of this post. Going through the whole thing I felt like an ebay virgin all over again. Now I'll have to watch out so I don't end up being easy, and buying stuff all over the place.
Posted by The Prowling Cat at 9:44 AM