Colds suck, but this batch of stuff from my friend at work doesn't.

I am constantly writing about a co-worker that has a sister in Colorado Springs. The greatest thing about this is the Rockies triple A team the Sky Sox are in Colorado Springs. Due to these two coincidences I asked him a few years ago if he could talk her into sending a few pocket schedules my direction. While it has been a sow process she is coming around.

The first year she sent three magnet schedules with the plan being one for him, one for their father, and one for me. None of them wanted the magnets so he gave all three to me for my collection. I wasn't about to complain as she tried, but she missed the pocket schedule. Year two or better yet last season. She sent three pocket schedules with the same idea on who to give them to. Each year my friend has went to visit his sister, and brought me back a Rockies shirt. Last year he picked up a Sky Sox fitted hat that I wear quite often. I'm thinking this pick up stayed with her as on Friday he dropped what is by far the best batch of stuff on me. 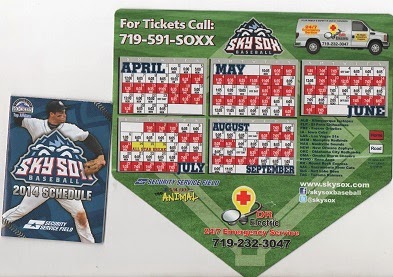 When he handed me these two bad boys I was thrilled. She finally got it by giving me both a magnet, and a schedule. She wasn't done with the magnet, and pocket schedule though. My friend reached back in, and handed me this. 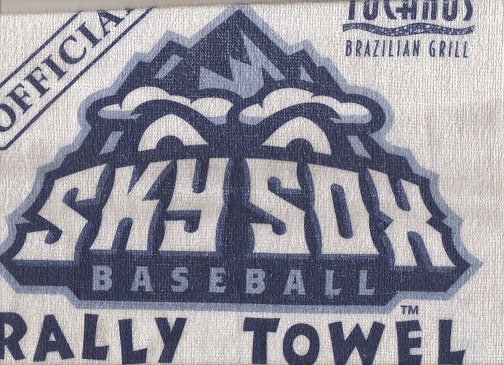 (sorry, but it's a scan. Didn't want to take a picture as it would take too much time, and well COLD'S SUCK!)

While I have never been a fan of the rally towel. This beauty will be finding a cool spot in the new hobby room if I ever get it finished. Currently I'm thinking about possibly framing it, but who knows. What I can say is its amazing how an item related to your favorite team can change your attitude on something.

Now I guess it's back to the couch with the dog. As I said in the title, Colds Suck!
Posted by The Prowling Cat at 10:25 AM