Just a couple days ago. I say a couple being I've been so forgetful lately, and can't remember which day it was. Ron who hails from the Yahoo online trading group TradingBases dropped his half of a trade on me.

The trade born from a request to the group for the last few remaining cards to complete his 2013 Topps flagship set. Looking though my few doubles I found two of the cards, and let him know to expect them. Ron answered back with I have a bunch of stuff for you so drop a bunch of Red Sox in a mailer, and we will call it good. What came was 38 cards I won't bore you with showing all of. What I will do is toss us all into the waaaay back machine, and show off a few of this great group. Hold on tight this is going to be a long trip all the way back to 2013! Got there so fast it almost seems like it was just last year. Kind of amazed that with such a long journey the machine held up as well as it did. While we are here why not show off a few of the goodies sent by Mr. Ron, and see how these stars have faired since these cards first appeared. 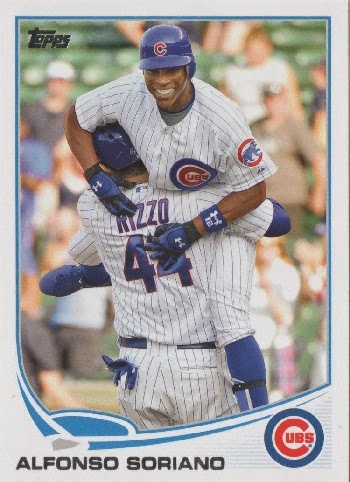 After 2013 Soriano went back to the team he made his major league debut with, the New York Yankees. Soriano hasn't been doing to bad for himself as he's played in 38 games with a .248 batting average, 5 home runs, and 16 runs batted in. The bad news is Soriano missed out on this great moment when he left the team.


Such a shame he didn't stick around, and be part of the celebration. I'm not sure there will ever be a celebration that equals the one held that entire month when the Cubs won the series.

Next was another player who changed teams for the start of 2014. Fernando Rodney joined the Seattle Mariners. While neither the team he left or the one he joined won the series. Rodney will always be best known for this event which happened July 3rd 2014 against the Chicago White Sox. After getting another save Rodney squared up, and the rest as they say is history. 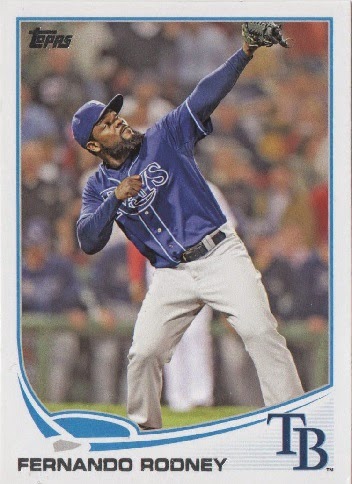 With no fireworks display scheduled for the night it still remains one of those great mysteries on how Rodney did this amazing feat. Sox fans showing up on the 4th were told that there would be no display that night as nothing could compare to the show from the previous night.

I could go on for days showing off these cards, and sharing what happened to each player. The problem is there were 38 stories to tell, and we need to be getting back. I've seen how these things end if you spend to much time in the past. Someone steals your time machine, and you spend an hour fighting to get back to your own time. That won't happen to us so lets get going. 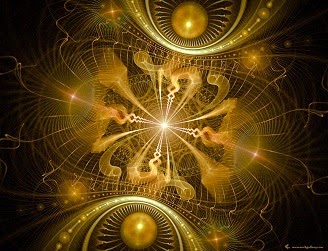 That was great, but I'm glad to be home. Hopefully you all enjoyed the trip, maybe we can do it again sometime.
Posted by The Prowling Cat at 10:07 AM