More than anything this means unless I do something today or Monday my mailbox might start to get lonely when it comes to baseball related things coming in. While I do have a trade that should appear in the next week. Nothing else remains, and I am going to need to fix this, and soon. Nothing sucks worse than heading to the mailbox realizing that 95% of it is going to be junk. I'd give a higher rate except we are waiting for some very important stuff related to the wife's wreck.

With all this mailbox loneliness about to happen here it is in all its glory. The final artelope for atleast a week or possibly two weeks.

The Timber Rattlers are one of those teams I write because for some weird reason I just like the team name. Their logo helps as it's not a bad design either. I chose not to use the logo, and try something different, and honestly easier.

Sometimes I think I should limit my amount that I do in any given day or possibly two days is three or four. To give you an idea the last seven were done in the same day. This can lead to a huge discrepancy in some of the ideas, and artwork on these. There are times I seem to just throw a few together to create some incoming mail. Stretching the amount out by only doing a smaller amount every two or three days might be something I should try. Who knows, maybe it would help with the ideas, and keep my drawing getting better. Doing a bunch all at once then nothing until they all return doesn't improve either. 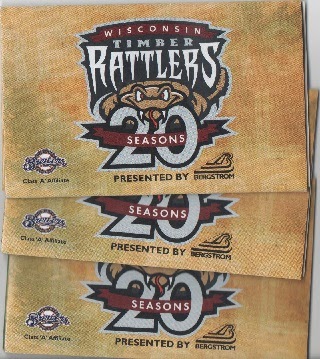 I do have an idea for a request going out to one of the NASCAR tracks. Look for it to appear in the next couple weeks as I would like to try, and get it done today. My only hold up will be that I am trying to work on the daughter's bedroom starting today. The plan there is to get the ceiling, and closet painted today. Then later this week the remaining walls followed by a new floor.
Posted by The Prowling Cat at 8:43 AM