Doing a few things around the house, and enjoying the three day weekend with the family I wasn't going to do a post today. Then while sitting here it hit me, an idea to talk about the failed venture of the American Defenders of New Hampshire came to mind. 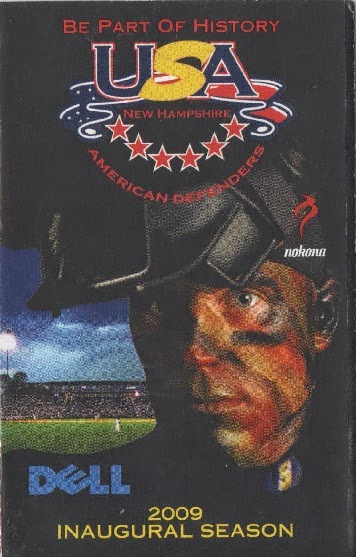 At the end of 2008 the Nashua Pride in the Can-Am league were purchased by American Defenders of New Hampshire, LLC. This groups first move was to change the team name over to American Defenders of New Hampshire. The idea was this new name would draw the fan base from the entire United States instead of just the Nashua region. Helping to keep with the theme the team was comprised of either ex-military or current military personnel. Ownership had players in mind from day one as they already had a tour of military all-stars that played across the country.

Things didn't go well for the team as their ideas of patriotism were not well received. The teams mascot a soldier in fatigues, and war paint with the name of 'Ground Zero', and the number 9-11 was just one of many failed ideas. Another idea of stopping all home games at exactly 9:11 to play 'God Bless The USA' no matter what the game situation was. This idea was crushed fast by league officials. Drawing crowd less than 100 on the average. Things didn't look good for the team, and its future.

By mid-season the team was dumping payroll by trading, or releasing the highest paid players. The GM was replaced with one of the investors to save money as well. In August the city of Nashua evicted the team from their home stadium. Claiming the team owed the city $45,000 in rent, and taxes. A tractor was parked on home plate at the time to guarantee the field couldn't be used.

It's a shame the idea of an all military personnel team didn't work. With everything these great people have done for our country. A team they could play baseball for, and get paid is awesome. Maybe one day it will be attempted again, but without going too overboard.
Posted by The Prowling Cat at 4:54 PM