While the title makes it sound like I got in some 2013 Topps, it was all a trick. Odds are it won't be until Monday at the earliest before I'm able to get my share of 2013 Topps. While the itch to get some of those bad boys keeps waiting for a scratch. I did get the first Mariners schedules for 2013. While I was only able to get one of each cover which was a disappointment. These two will be making it into the Mariners schedule collection. Hopefully in the future I can get more to add into my player collections for these two players. 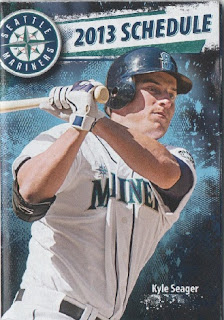 I was pretty excited to see that Seager was on one of the covers. I like this kid, and hope for a great season for him at third. If he pans out this could be the first of many years Mariners covers for Seager. 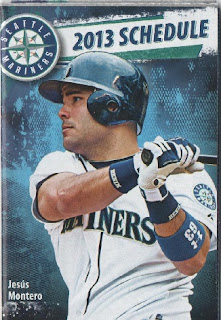 Jesus Montero was the first cover released by the Mariners this year. With Olivo gone this is going to be a huge year for Montero. As of right now he is the favorite to be the starting catcher once the season starts. There is another catcher waiting in the wings though that could have a strong enough spring, and could break into the spot. Either way Montero will be on the roster in just what position is the question. Will it be the main catcher or, back-up catcher with designated hitter most games.

No matter which of the two he does. Much like Seager this will be a telling season for the young catcher.

With the first two covers out there are now just a couple questions left for the Mariners schedules. How long until the Felix schedule finally pops up?
With the return of Ibanez does he get a schedule? I'm saying he does, and it will be the Spanish version.
Last is with Ichiro gone will the Mariners keep going with the Japanese, Cambodian, and Chinese schedules? If they do who will be the new cover boy for these language schedules that have been a staple since the first year Ichiro arrived.
Posted by The Prowling Cat at 3:00 PM