Not very long ago a great blogger named Tom send me an e-mail wanting to do a trade. This trade didn't end up being just any trade though. This trade ended up being historic. How could it be historic? The trade not only finished two sets, but contained one of, if not the best pitcher to ever take the mound.

Just with that first paragraph it's obvious that the meat, potatoes, and dessert of this trade was Nolan Ryan. 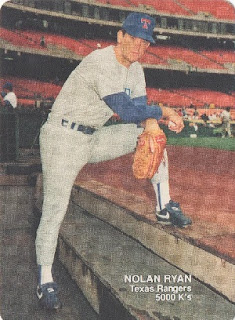 This card is from the Mother's Cookies set commemorating Nolan's 5000 strikeouts. The card is #2 of 4 for that set, and as I already said it completes this set.

Next was another Ryan. 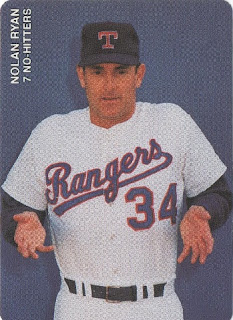 I look at the card, and his shrug taunts me. It's like a shrug of what took you so long to get me, and finish this set. The taunting is over now as I've added this card #8 to finish this set.

Now if I can only find where I put the first four cards to this set. It's things like this that is the reason I had organizing my collection as a top priority in my 2013 goals.

With the biggest name in this trade done it's time to give love to the other cards as well. 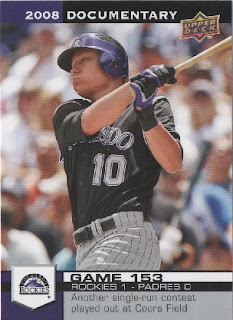 Another 2008 Rockies Upper Deck Documentary. I think this puts me either 160 or 161 away from completing the set. While it is one of the most disliked sets from the people I've talked to in person. I will finish this one day as I like the thought of being able to read about that season. Who cares if they used the same picture a million times.

Last, but not least in this awesome trade. 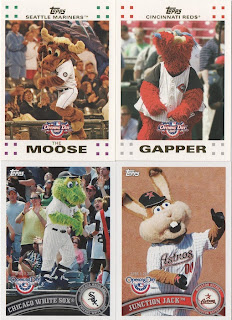 Tom finished me off with four more mascot cards for the sets. Adding to the joy is the fact that one of the cards is our closest mascot, the Moose. These four cards also means I think I doubled my mascot cards just this week.

Now that I've gotten this far, and almost forgot. Go check out Toms blog Angels In Order. It's a great blog ran by a great guy. So go support him, and learn some stuff about the Angels.