This Is Going To Hurt!!

Last week we spent five days at the coast. In my post about this trip with some of the goodies that I brought back. I talked about how up here in the Northwest we love to watch waves crash against the rocks. This got me thinking about how as a society we just love to see things crash against each other.

The facts are there whether we want to admit it or not. We just love to watch things collide. In some part of the country they have demolition derby's. Nothing says crash like watching two cars go after each other and metal flying everywhere.

The most watched sport currently is the most violent, football. A sport where the players crash in to each other play after play.

Sometimes the thought of a collision about to happen will get us excited. An example is this 1994 Stadium Club card. 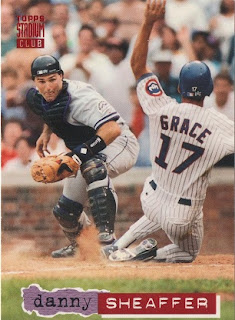 Just the look on Sheaffer's face lets you know he is preparing for a dive that even he knows will get ugly. Did he make the play, or was Grace safe? I'm going to go with safe as it looks like Sheaffer just isn't committed to the effort needed to make this play.

This card here is one that can drive a person crazy. 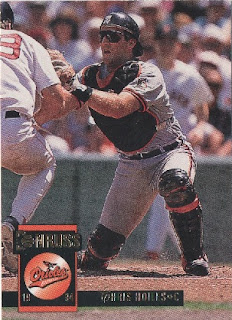 It's like a wave coming in against the rocks. There's Hoiles all ready to take the shot from a player looking to dislodge the ball. A full head of steam going against a man who's only protection is the gear he uses. The anticipation of this shot is just pure excitement. This is one of the shots that leaves you wondering how did this play end?


While looking for cards to write up this post my blood got flowing when I came across this card. How can't you as a fellow crash lover not enjoy this card? 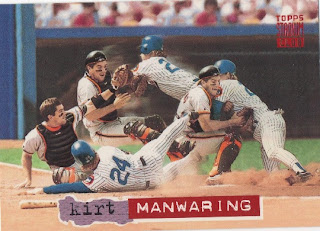 The card is what homeplate collisions are all about. Even if you aren't big on these you have to admit the way Stadium Club captured the entire thing and put it all on one card is great. Could you imagine seeing this on a motion style card? Being able to move the card and watch this play over and over would be a dream come true. I guess we will have to settle with this though, and I'm fine with that.

Some cards leave the imagination though with what just happened. 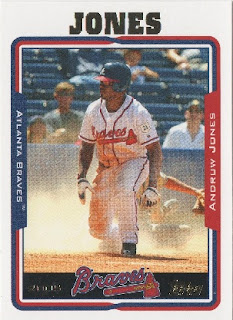 We see all the dust, and in the background it looks like the catcher is down. Was Andruw safe or out? It's a great looking card which leaves me wondering the answer to that question. From the looks of things Andruw was wondering the same thing at the time.

While I found many other examples these are what I consider the best of the best in what I could find going through my cards. The cards that just left you knowing that it just had to hurt when the play was over.

Posted by The Prowling Cat at 3:30 PM