I'm not sure if I'm the only one or if other guys do this as well? I have a kind of footlocker that I made while in 8th grade shop class. It's still a sturdy box that ever since it was made houses all my finished card sets. It's not a big box which isn't a big deal as I only have one huge set, and a bunch of smaller sets.

That's not what I wonder if I'm the only one though. The one huge set is 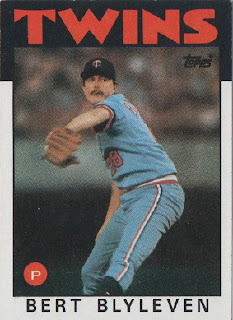 Yes, 1986 Topps. While it might not be one of the more fantastic looking sets it does have a special place in my heart. You see that was my first set that I ever built. It's the only set still to this day I have completed with over 350 cards in it. While I have put together other sets through the years, that 1986 set is still my first. Remembering that set is too also remember what went into building the set. 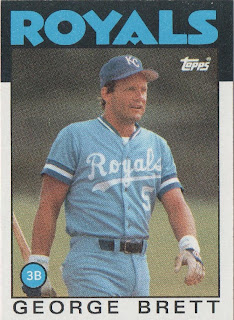 When I started collecting baseball cards as a kid building sets was quite the challenge. There was no using the internet to arrange a trade for the few remaining cards. Throw in that I was living in a very small town. We are talking the type of town where most everyone knew each other. To give you an idea of size. When I went to high school our school took 7 towns, and there was under 800 kids.

We had very limited television channels. The only ballgames we had were on WGN, and that was the Cubs. A couple years later the town finally got TBS, and Braves games. By then it was too late, I was a Cubs fan. All this was before the 1986 set. 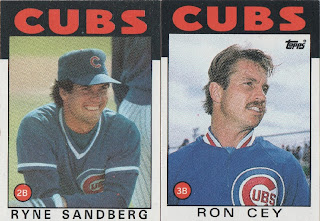 Now with the little history lesson out of the way. The year this set came out I turned 16 that summer. Until then trading was limited to only the few kids in town that collected baseball cards. With only two chances to watch games not many of the few kids in town collected cards. Set building was a pipe dream that would be tough to even imagine. We were kids anyways, and just getting all the cards from our favorite team was an accomplishment.

While I was able to finish Cubs team sets. Never had I ever attempted to build a full Topps set until I finished the 1986 set. By then a card shop opened in the town that my dad worked in. So after the official turning 16 a friend, and myself would go to work with him. Only to ditch him , and head on out to harass the card shop guy. The world was changing for us as a whole new world of baseball card collecting had opened up.

All this magical happenings led to what will always be my first. Like I said before. She might not be the best looking girl at the dance, but she will always be the first I danced with. 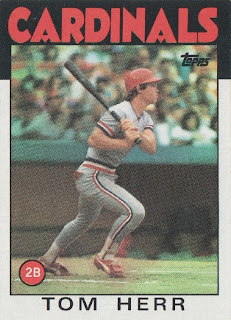 Posted by The Prowling Cat at 3:33 PM