For the last week or so I have been talking about how I sent out tons of artelopes over a two week time frame. In the mood to do something different I wanted to send some out specifically for business cards. So I picked out two of the tracks that holds NASCAR races, and sent out requests.

The first of the two sent, and the first returned. Doing some research after the return it came to my attention that I sent it to the GPS address not their mailing address. Can anyone other than me hear Homer Simpson letting out a huge D'oh. Guess this means that in the near future I'll have to replicate this envelope or do a brand new design.

My second request was much better, and is why I do these.

Based a little off one of the logos used by the track. This is only the third artelope I have done where the only area not colored is the address. Whoever said the third time's the charm was talking about this very return. 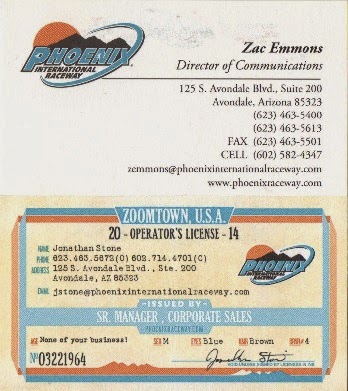 Looking at the bottom card reminds me of why I contact places like racetracks for business cards. Whoever came up with the idea for that card was a genius in promoting. The idea for a business card is to promote your business, and this card does that better than anything I've seen in awhile. I'd like to think that by going the extra mile with the artelope it helped in getting both card designs.

On a side note I would like to congratulate Phoenix International Raceway on their 50th anniversary.
Posted by The Prowling Cat at 2:30 PM