On Tuesday night I went to the mailbox, and noticed a trend. The trend was that for the third time this year fellow TradingBases member Cliff has dropped a PWE on me. While the first two contained Nolan Ryan cards for the personal collection. This PWE went in a totally new direction, and completed a set. Not only did Cliff complete what is my fourth set in what is a fairly new year. He picked a set that is very near, and dear to my heart. Thanks to some great cards from Cliff for the second time this week we get to see plays at the plate. 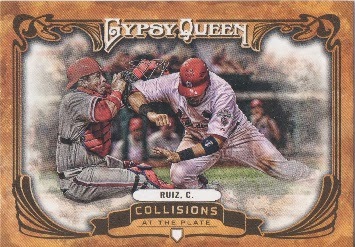 How ironic is it that after my Thursday post I'd start with the colliding play at the plate? Two of the three cards Cliff sent have runners sliding instead of crashing the catcher. I wanted to start off with the lesser known catcher, and work my way to the big name. 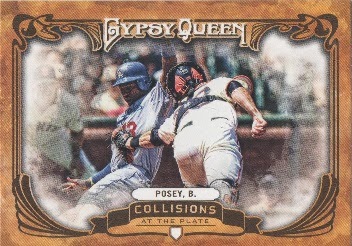 Talk about ironic cards. Posey being injured, and missing most of a season is what has started the entire thought into changing the rules. Losing what is a major player for the MLB is something they don't want to see repeated too many more times in the future. 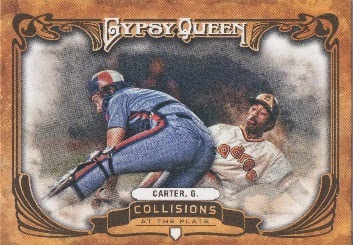 Finishing up the set is the great Gary Carter. Having some great all time catchers like Carter is what makes this a fantastic subset. The way Topps used current great catchers with past greats was a brilliant idea. This is why when I first saw a few of these cards at a card show last year I had to get the set. Now thanks to Cliff's generosity I can say the set is finished.
Posted by The Prowling Cat at 6:00 AM