I'm not going to say this will be another historic post about baseball tonight. With my mind partially into writing this post, and partially into the Dodgers versus DBacks game on right now. Lets be honest, my mind is more into the game than it is into this post. Things are changing though as I just made the mistake. Noticing that this game had to have been played during the day I looked up the score. Guess I can focus more on blogging now. 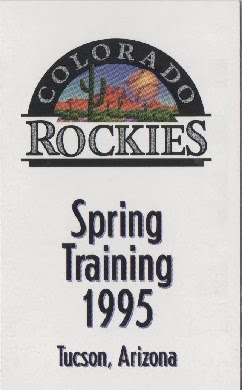 Sporting the desert logo that would appear on their spring training schedules for 1995, 1996, and 1997. The 1995 schedule was fairly plain compared to future schedules. 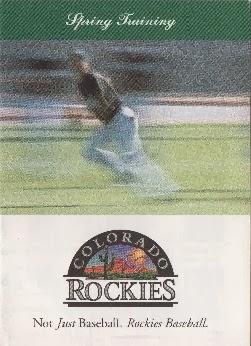 Finally in 1996 the team added photos to the cover. The picture is just as blurry in person as the scan shows. To me it's a cool look, and at the time probably the best looking schedule the Rockies had put out in their short existence. 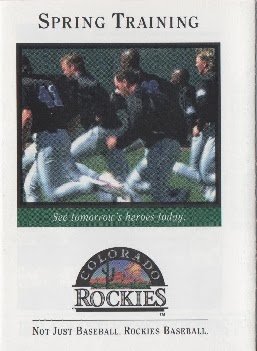 Thursday I'll show those examples before getting to the current, and much flashier style the team currently uses.
Posted by The Prowling Cat at 7:13 PM