After posting not long ago how I was going to not buy anymore packs of 2014 Topps. That was until I decided if I was going to build the set or not. Then came Friday, and a moment of weakness. Deciding to put in some vacation time, and leave after half a days work. I headed towards the Goodwill in town to look for treasures. After a quick search I cam away with nothing more than air.

Still wanting to add something into the hobby room. The thought of why not hit Target, and see if they have any of those MLB Teenymates. While there the urge to see if they had any new 1/64 NASCAR cars of Kyle Busch hit me. Walking to the toy section I once again came up empty. Most the cars were for the minor drivers that seem to always be driving in the rear. Not something I was interested in by a long shot. Heading disappointed towards the card section I rounded the corner, and jackpot! There was the display for the Teenymates. I had to see these things firsthand so I nabbed two packs.

My take is these things are pretty cool. One downside is they are 3.99 for a pack of two which did seem a little much to me. Despite their small size these are fun little collectibles that if I can get over the price-tag will be fun to keep adding. The biggest challenge will be not losing these things. If you haven't seen them in person they are very small. I thought they would be small, but not this small. My recommendation is if you have small children that like putting things in their mouth. I would avoid putting these anywhere near them for that reason. In our household I will have to make sure they stay away from the dog, and cat.

Not finished up my moment of weakness were baseball cards. Looking over the packs I did what I was trying to avoid. I picked up two packs of 2014, and got the following special stuff.

After going through everything, and doing a little thinking. I finally came to the conclusion that I will work on putting together the set of series 1. Currently I stand at just over 200 of the cards for the set. Whether this will branch into building series 2, and update when they come out will be decided later. Right now my short term goal is to just build series 1.

Keeping myself on course the purchase wasn't totally without a goal. Sitting in a box, but not listed on the blog is a partial set of 2013 update. Not wanting to go all willy nilly I bought a pack of update for that set. So far I haven't seen if any are cards I need. The good part was atleast I bought a pack of cards for a set I am working on instead of three packs of 2014. 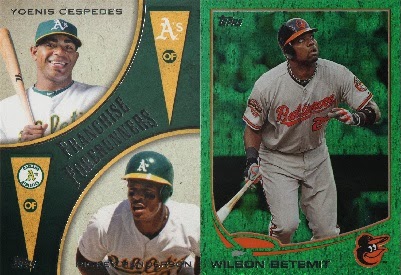 While I did have a moment of weakness. Not everything was a total loss. Some real treasures came home for the collections.
Posted by The Prowling Cat at 10:16 PM