I had a plan to show off some cards today. That was quickly squashed on Monday evening as the bad news came pouring in. The news came with pictures like these. 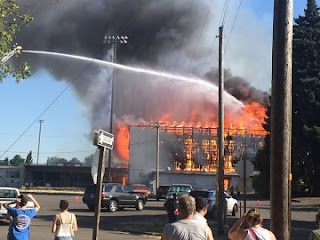 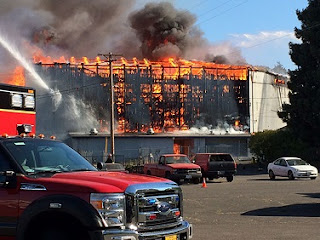 What you are seeing is one of the ten oldest stadiums in baseball burning to the ground. Opening in 1938 the stadium was home of the Eugene Emeralds until 2009. Before the move we made it to many a game, and I won't lie. Most of the time I couldn't wait until the team moved into the new PK Park. Looking back now I will miss the games we used to watch there. While I enjoy the newer, and more modern PK Park. As I get older you start to appreciate the older ballparks more than you did when you were younger. 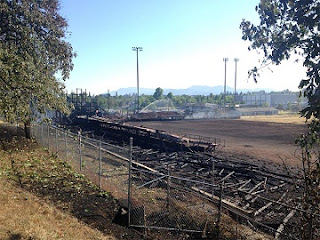 Made of seasoned timber above is all that remains currently of the once great stadium. The wood is still smoldering so odds are there will be even less when things are said and done.

The worst part about all this is the stadium was purchased recently by a group that was about to start renovations on the stadium. Their plan would have prevented it from becoming an overgrown eyesore, and something great again. With this disaster still fresh the group claims they will be reassessing their plans now, and will decide what direction to go now. Hopefully something good gets done with the space as was the original plan.
Posted by The Prowling Cat at 5:58 PM