With short season leagues prepping for their start here in the next couple weeks. I felt the motivation to once again get a set of artelopes going out into the world looking for schedules, and business cards. The first set were sent out on the first with one making it home already.

For some reason Princeton doesn't bring out my best work. I'm beginning to think that it has to do with the fact that they are one of the few business card holdouts of the Appalachian League. Last year the count was at two teams, but that changed back up to three with the Yankees taking over Pulaski. The Appalachian League has been a brutal chore in finishing the business cards. My connection in Eugene has been where most the cards have come from. For some reason he can get the teams to send them half the stuff in their office. Here in the cat house the returns always seem to be the same, two schedules. 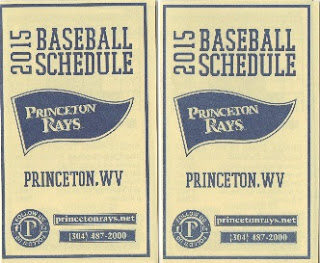 The past couple years the Rays have done two different schedules. This year it seems the team went with just one style, and sent me two of that schedule.

Just this past week I got in a new secret weapon that will hopefully help solve the Appalachian League rubix cube. Staples had a sweet deal on business cards, and I got some printed out. The plan is to add one with each of the hard to get teams, and hope it helps finally crack them. The theory is being tested already as I included a few in some sent out this Monday. Soon we will see if it works.
Posted by The Prowling Cat at 8:18 PM