Since starting this blog just over two, and a half years ago. I continue to learn that bloggers are a rare breed in their collecting. While in many circles collectors focus on only their own collections, and adding cards or what not into said collection. A large majority of bloggers are looking out for their fellow bloggers collections just as much as their own collection. This is just one of the many things that I personally feel separates the blogging community from any group. It inspires me each, and every time I go into a card shop, or card show. Not a time goes by these days that while going through cards I'm thinking about who could possibly use a certain card. Maybe one of these days soon some of those cards will actually make it to those people I've picked them up for.

I mention all this because around one month ago Duff from the blog Bleedin' Brown, and Gold had sent me an e-mail. Inside he gave a warning that he was sending some schedules, and Cedar Rapids Kernels business cards my way. A post that was made last month with some sweet additions to the collections. The meat of this e-mail was to let me know he comes across a fellow schedule collector while at a certain card show. In blogger fashion he talked to the collector about me, and let him know he'd pass along his e-mail so we could hook up a trade. It's always awesome when a new collector pops up, and even better when who knows if this crossing of paths would have even happened without Duff's help.

After exchanging a few e-mails a trade was born, and now completed. 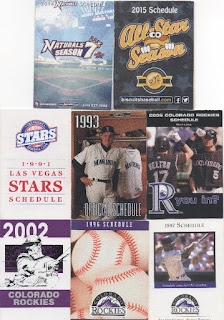 More than any other sport I am a baseball collector in not just cards, but in my pocket schedule collecting. The Rockies schedules, and Mariners schedule were one the wantlist for a few years now, and some I'd honestly doubted would ever appear in the Cats collection. Las Vegas was another I'd doubted on a certain level, but not with the same doubt as the Mariners, and Rockies. Just those few alone would have made this an amazing trade in my eyes. Things were only beginning in this trade though. 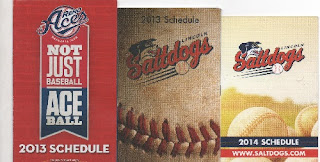 The Saltdogs have been kind of a weird team when it comes to my schedules. When I first started schedule collecting the inner child in me picked some of the teams I gathered schedules from due to name or logo. Some of those have slowly fallen to the wayside, and a few times the Saltdogs almost joined that list. They have been saved by some classic looking schedules that I enjoy seeing each year, and every time I come across them in the binder. The Aces fall under a fascination I have with teams from Reno, and Las Vegas. Something about these flashy cities draw me in, and so I collect schedules from their baseball teams. 2013 was a crazy year in my hobby as I was in a schedule hobby funk, and mailed teams more for business cards than for schedules. What this did is create a huge hole in the collection for 2013 that I'm still trying to fill. 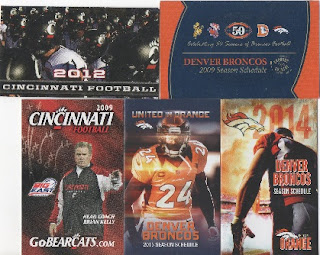 Football is a real soft spot in the schedule portion of the schedules. With the wantlist only having a few teams contained on it. This part of the year is usually spent contacting either teams, bowl games, or race tracks for business cards. Miami, and Utah usually get letters, but outside of that there are collectors in Cincinnati, Las Vegas, and Denver that are out there to trade with. Any missing years are due to failing to make a trade with any of these three collectors. 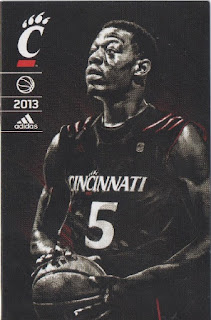 Basketball is an even tougher hit than football with the entire collection being three college teams. Making a trade that drops one schedule off this list is a huge deal. The worst thing about this schedule is once again it's another reminder of how many 2013 schedules are still missing in the collection.

I haven't made a schedule trade like this for awhile now, and it felt pretty good. All this goodness came thanks to another blogger showing why I think this is such a great community to be part of. Someone coming across two collectors that might have never crossed paths, and putting them together.

A special thanks goes out to Mick who sent all these wonderful schedules. Hopefully we can get another one together in the near future.
Posted by The Prowling Cat at 9:54 AM