On Saturday I had make the trip east to pick up the daughter from her two weeks with her mom. Things were different this trip though as we decided to meet an hour later than the usual eleven. To me this meant time to go at the usual time, and hopefully hit the Goodwill, and a few antique shops I've had my eyes on for awhile.

Getting up early, and heading out I made great time, and arrived at the usual 10:30 I always seem to arrive. As I hit town I made a mad dash straight to the Goodwill. Last time I was there a couple bobbleheads caught my attention, but not at the price they were asking. Hopefully they would be half price this time, and I would be able to pick them up. The good news is they were half price, the bad news is in the two weeks since I saw them they got trashed. I take that as a sign that they weren't meant to join the Cat's collection.

From there I made it to the second, and the one place I've been wanting to visit for years. Why I never went there is beyond me, but odds are its been for the best. Going there before now I might have come out empty, and never gone back. Heading there on Saturday netted me an interesting treasure. 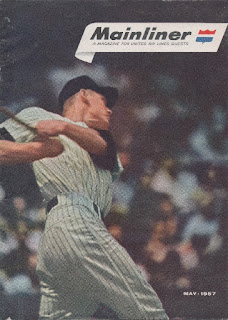 As you can tell by both the scan, and the post title. It is a United Airlines Mainliner magazine from May of 1957. I found it not long after entering the antique mall, and kept debating about whether or not to buy it. As you can tell, with only a two dollar price tag it came home. Odds are I will try to figure out how to frame it, and hang it on the wall as the cover just seems cool to me.

One of the cooler things about the magazine, and not baseball related was a sort of advertising for the Rose Festival in Portland. 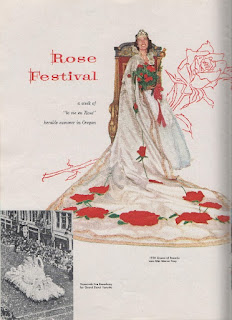 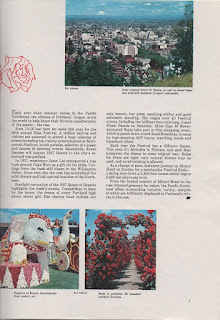 The Festival still goes on to this very day, and has grown probably ten fold over what it was in 1957.I wouldn't even be surprised if the Rose Festival information was the real reason this magazine was saved for so many years.

For me the reason to buy it was these two pages, and the cover. 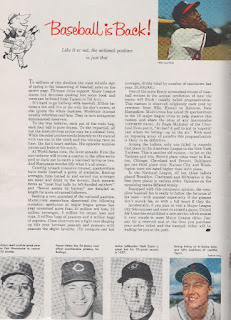 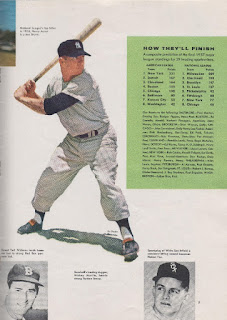 I like how they turned this article into an advertisement for purchasing tickets through them for games. 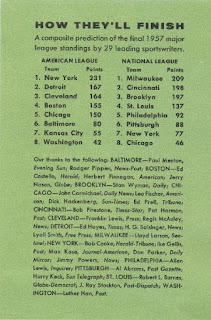 Another thing of interest was the green box, and their projections on how the teams will finish. After seeing that I had to go through, and see how they did in their guesses.


American League final standings
I can't decide if they did good, or not. You figure the Yankees were a juggernaut during this time frame so picking them was a no-brainer. Kansas City was in a run of finishing 7th, or 8th with Washington swapping the spots with them. Using that math all you had to do was figure out how the other five were going to finish.
National League final standings
The predictions for the N.L. was a touch better as they nailed down four of the eight. I feel they did better as the four they missed were reversed. Looking back at how the teams did around the time frame they went out on a limb with some of these. This was the one year Brooklyn didn't finish first or second, but finished third as projected. Putting the Redlegs as second was reach as the team was a constant 4th place. If you spend the time I did looking at how they did for the few years before, and after 1957. You will see that getting four was pretty good as the N.L. was a crap-shoot.

Getting this magazine, or whatever you want to call it was well worth the two dollars. Just the fun look at how these teams did during that time frame was educational to me. I've learned some things I didn't know about those years. Maybe just maybe this will lead to me expanding my baseball knowledge to years beyond my lifetime. I've been curious, but need things like this magazine to get me to branch out.
Posted by The Prowling Cat at 6:23 PM