Lately I've had some artelope ideas floating through the head, and waiting to be put on envelopes. The thing was they are a far cry of the stuff I have been doing since starting this project. Since day one all the drawing has had some sort of tie in with the team's logo. My latest batch has had a combination of drawings with the logo tie in, and some that haven't had that.

With the movie coming out in the near future I had minions on the mind. Using that as my inspiration I thought why not have one kicking a soccer ball into the goal. From there the idea of having the goalie not paying attention to the shot seemed like something i could see a minion doing. While my artwork can still use some work it was a fun idea that accomplished its goal of a successful return. 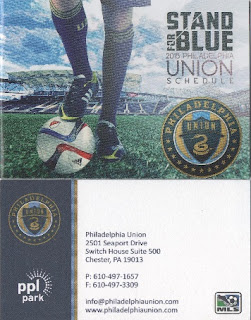 The Union hit me with the business card that honestly was the sole reason for this request. Coming back with the card was the pocket schedule above the card.

My first attempt at drawing an actual human looking figure turned out decent I feel. While I left out ears it was my first attempt though. Who knows when the next attempt like this will happen, but it was something I needed to try. 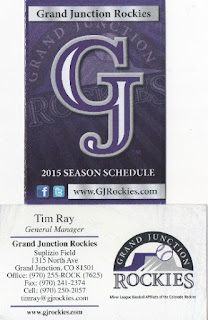 This request was for schedules as Grand Junction is one of the Rockies affiliates I collect. In the past the team has had a home schedule on the back so I added the usual business card request just for kicks.

Two great returns that got me inspired again, and led to seven more artelopes getting put together, and sent out. Hopefully my luck keeps running, and more returns like these two will keep streaming in. We will be heading to the coast in the near future, and I will be taking all the artelope supplies. Maybe this trip will inspire more outside the box ideas that I can run with.
Posted by The Prowling Cat at 8:17 PM