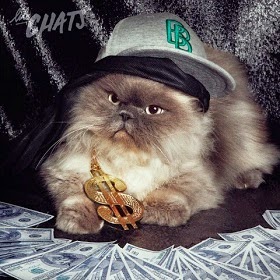 As most the world knows by now, Tom over at "Waiting 'til Next Year" is running a contest. This contest is a follow up on a contest he recently won that was run by another blogger. After winning his prize Tom sorted through all the cards, and is now sharing his good fortune with another two people.

It's times like this that bring out Pimp Cat, and his uncanny ability to pimp contests. While he has thought about making an appearance before he's kept to himself waiting for just the right time to pop out again. Maybe it's because Pimp Cat is picky about using his pimpin' abilities. You can't just show up all the time pimpin', or you'll end up losing respect. Pimp Cat isn't about to do that as he does have standards you know.

So listen to Pimp Cat, and head on over to Toms blog "Waiting til' Next Year", and not only join the contest. If you aren't reading his blog on a regular basis then start doing it, and do it now. Pimp Cat demands it!
Posted by The Prowling Cat at 5:54 PM