Big day here at the cat house in the artelopes returns. With 12 out roaming the badlands, and nine of those being baseball. It will be a big couple weeks hopefully in getting these back.

One of the two MLS requests as I'm testing the waters for more requests. If the next return fares like this one I'm undecided on if I should try more soccer teams or change direction. As for the artwork I have to admit it was another that wasn't my best work. It ended up being a somewhat sad attempt of the teams logo, but on a much bigger scale. 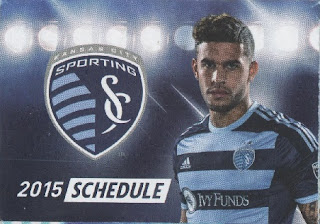 Sporting Kansas City did send four of the nice looking schedule above. While the schedule is very classy, and personally a great looking schedule. I'm disappointed since the entire reason for this request was to try, and go after the missing MLS teams.

Deciding to go simple with another drawing I sent this out to the Aviators. Much like the Appalachian League yesterday, Rockford is a tough nut to crack. This is year three for the franchise, and they still remain the only team missing from the independent Frontier League. Who knows if I send out one of the business cards I just had made if that will help. 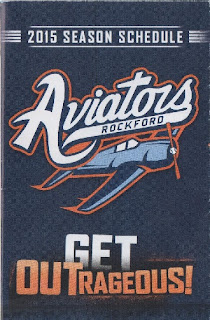 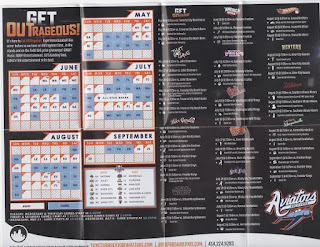 Sending four of the plain looking schedule above. I will give the team credit on the inside as they spent a ton more time creating that part of this schedule than they did on the outside.

Closing out this showing is the one return that finally put me in my happy place. I'm not sure if it is a coincidence that it just so happened to be the best artwork of the three. The idea was simple in using the logo for this new team in the independent CAN-AM League. The bummer is the scan doesn't do this artelope justice. The gold color is my gold colored pen that has the sparkles in it for that extra coolness. 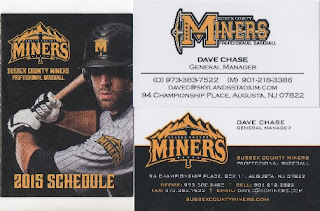 My inspiration is even more obvious on tone of the business cards, and the schedule. While I might normally gripe about the team only sending one schedule I am honestly thrilled about these results. The team sent four business cards as well as the schedule. Odds are the Miners will be added into the collection so this schedule will be staying here, and going into a binder. I'm a fan of the team name, and the logo choice they went with. Throw in the team treated me great on this initial request, and that goes a long way.

As I hinted yesterday with the Princeton Rays post. Odds are artelope posts will be the mass majority of posts here for awhile as I have the now nine requests out there lurking. Besides those nine there are currently three more waiting in the wings for me to write the letters. After those there will be even more as I'm just in the mood to be getting these sent out. When that itch is going I have to scratch it, and run with the feeling.

Don't get me wrong though. There will be some of the usual stuff scattered in every so often. Until then I hope you enjoy the artelopes.
Posted by The Prowling Cat at 6:52 PM