Playing With The Cards

While it might be a day late I can't help but say that hopefully all the dads out there enjoyed their day. For me it was great, but a sad day at the exact same time. It was sad because the daughter is currently doing two weeks at her mom's, and so she wasn't here. With a big summer of plans this was possibly the only time all summer she can pull two weeks so it had to be now or never. It was great because I spent the day doing some things that I've needed to do but haven't.

Most of the day was spent sitting in the hobby room playing with baseball cards, business cards, and pocket schedules. Despite the collections being organized better than they have in years, there is still tons to be done. So I thought it would be great to spend the day organizing while listening to some incredible electric music from Electric Daisy Carnival. When all was said, and done some serious organizing was completed. Not only did cards, and schedules get played with. Some things that have been needing done to make the room look better got done. The room itself is still quite away from completion as well, but some stuff got done. Overall it was a fantastic day that was everything I could have wanted.

How can a baseball card blog go without something related to the blog? So, here's a card. 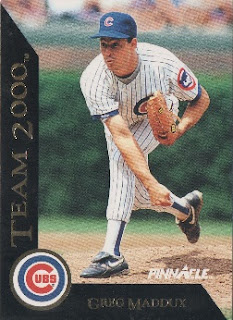 1992 Pinnacle team 2000.
Currently I am missing these three cards for a completed set of these fine cards.
16(Dave Hollins) - 24(Bernie Williams) - 79(Reggie Jefferson)
If you happen to have one, two, or all three cards I'd love to hear from you, and possibly put this set to bed.
Posted by The Prowling Cat at 4:52 PM