With me hitting the needed business cards hard, I sent out a second attempt to the Charlotte Knights.

I've sent to the Knights atleast once a year since starting the artelopes project, and have come away empty in the business card department. Earlier this year an attempt was made, and still no card. Wanting to try, and change my luck, and being on a creative streak lately. I thought why not go bigger than the simple stuff I have been sending to the Knights. This all led to what you see above in a knight sitting on a horse ready to joust. 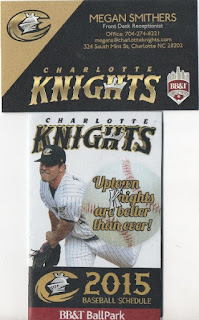 The little extra paid off as Charlotte finally dropped their latest business card on me. Included with the flashy new business card was two of the teams schedules.

Another addition from the International League found its way home on the same day as the Knights. Buffalo has gone through an affiliation change, and was thus needing an update.

Originally I was going to just simply do the baseball with the city skyline inside. Then the idea to add that extra touch of doing the buffalo horns hit me. While being pretty simple I like how it turned out, and was even more thrilled with the results. 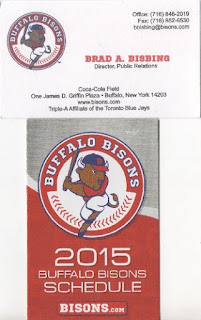 It was a great day as Buffalo represented with four schedules, and the much needed business card. Adding to my excitement is now the International League remains at two teams Rochester, and Pawtucket. I have a week off coming soon, and will be thinking up an idea for both teams. They will be my second requests this year for both teams, but if it pays off like Charlotte did then it'll all be worth it.

In an update to the Civic Stadium fire post. I just heard, and it was confirmed on the Eugene news website. Four kids have been arrested for the fire with more information to be released on Thursday. Odds are I will do some sort of related post Thursday evening with what they said.
Posted by The Prowling Cat at 7:32 PM