With so much going on this past week, and continuing through this weekend. I've got four posts that are needing to be done. Figuring that this would be the easiest under the circumstances. Artelope returns from two baseball teams gets to take center stage.

Neither of these were anything mind-blowing as their single goal was to get schedules from two teams I collect. I'd even considered not showing them, but then thought under the circumstances why not throw in a quickie.

Keeping it basically as simple as you can. The idea is three dust devils that were created by using the teams two colors. Created during one of the dry spells in ideas it did part of it's job. 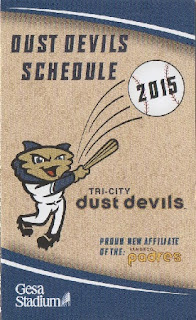 With the team going through an affiliation change from the Rockies to the Padres. A business card, and a few schedules was the main goal. Tri-City met half of that by sending out two of the above schedules. Ironically this seems to be the common theme from the Dust Devils this year. So far I have heard of three returns, and all three are saying the team sent two schedules. Others are still waiting as the Dust Devils have been very slow in sending out returns this year.

This was the second request to the Drillers this season. Being the second I came up with the idea of doing an oil rig, and gushing the teams color of blue. While simple it turned out as I had hoped. 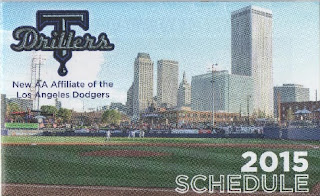 Every season the Drillers seem to put out multiple covers, and sponsor variations. While there has been one cover, and a few different sponsors on the back. The return failed to yield any new results in either category. This leads me to believe that the first time in over fifteen years the team went with just the one cover, or my luck was terrible. Sadly the sponsor on the back was the one sent to me earlier in the season.

While not exactly what I had wanted when sending out this request it was worth the shot. So much so, that in future years I will not be swayed, and send out an early attempt, and late season request again.
Posted by The Prowling Cat at 8:46 AM