Our plan for Thursday was to hit a few beaches south of town. Things changed though as the weather went south in a hurry.With the clouds roaming the wife, daughter, and her friend all decided to stay at the beach house while I went out alone. Kylecard kept me company though as I hit two different beaches for short walks. 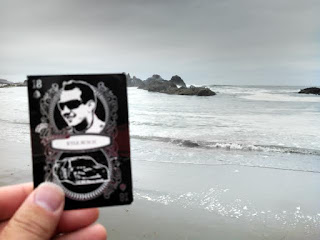 This was the first beach Seal Rock which oddly enough had zero seals. The walk here was fairly limited as you can't see it, but to my right was a huge rock that blocked movement any further north. Going to the left was a stream not far away that I didn't feel like crossing.

From here I went maybe five miles south, and hit another beach called Driftwood beach. Much like Seal Rock, and it's total lack of seals, it had no driftwood. The walk was much better though, and felt good to get out, and do as the clouds kept it cool.

Hitting these two beaches would be the last hurrah as the wife was missing being home. We came back today, and have some weekend plans that need to be done. Out of everything I got to get out, and do. The trips to the antique malls ended up being huge disappointments. For the first time ever I came back empty-handed. Maybe the next trip, or this weekend's errands will yield better results.
Posted by The Prowling Cat at 8:50 PM